A Couple of Gifts

Did I tell you that in December we had to buy a new furnace?  Yeah, that was an unexpected expense.  Santa was like, “Welcome back from Guatemala, please pay a million $$ for a new furnace.”  So that pissed me off.  Fortunately, we were able to get it installed in 2016 (yay for tax credits!) and in between snow storms.  Well, the guy we hired to replace the furnace loved Biff.  He also has a pitbull so we bonded over that a bit.  Anyway, he took this picture of our beautiful dog while he was here:

Oh Biff!  Well, a couple of weeks ago, the guy called us to say he had something to drop off.  I had no idea what he wanted .  Anyway, it turns out that his sister is an artist and she drew this:

It’s in pencil and we love it!  I think Bing is pissed that we don’t have a drawing of him so he does his best to scratch Biff every.single.day.  #frenemies

For Christmas, I gave my brother and my sister a couple of awesome gifts.  Instead of buying the kids  presents , I gave them four hours of babysitting every month, for the year.  The only requirements are that they have to schedule the babysitting the month before and they can’t save all the hours and use them at once.  Four hours is just about all I can take at one time.  And so far so good!

Last weekend, I hung with my little friend Kennedy and we watched The Secret Life of Pets.

This morning, I babysat Kai and Kaz while their parents went to brunch.  I thought the boys would enjoy making cupcakes so I brought a mix and frosting with me (fewer ingredients = less mess and fewer steps in the process = I freak out way less).  It was a total hit. 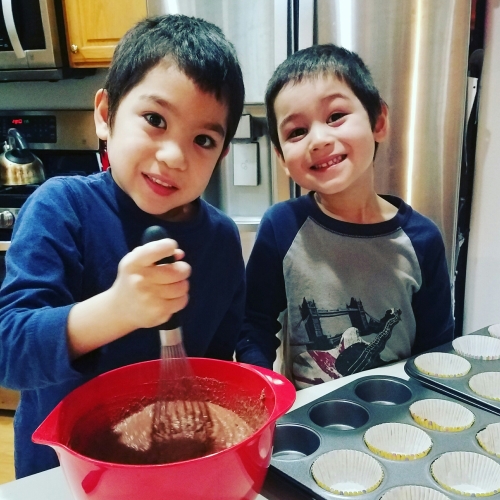 This was my first cooking experience with them and it went so well.  Some of my favorite childhood memories are from when I spent time baking with my Uncle Daniel and I hope the boys got a little bit of that today.

I will also bake with Kennedy when I babysit her later this month.

We are now watching the Super Bowl…HAPPY SUPER BOWL SUNDAY!

This entry was posted in Baking, Creatures, Family. Bookmark the permalink.