It was only a few days…

But I wasn’t sure I’d make it.  We had a guest for the past week: 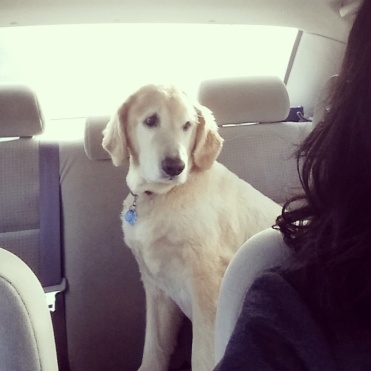 Yes, my brother, Max, stayed with us while his parents vacationed in Mexico.

He’s a great walking buddy…if you like walking a polar bear.

We were having a great time until Bing decided that he needed a little more attention.  Bing got in a fight a few weeks ago and was recovering well until Wednesday night when I noticed his head was a bit swollen.   On Thursday night, Bing thought it would be a good idea to scratch his head open so the fluid would drain.  I took Bing to the vet on Friday.  Now he looks like this:

You can kind of see the bald part on the left side of his head.  Idiot cat.  Bing does not like the cone of shame.  And Max was completely confused and concerned about the cone.  When I first put the cone on Bing, Max stared at him for an hour.  Idiot dog.  That made Bing very uncomfortable.  And it made me want to bury them both in the backyard.

As luck would have it, work at the pizza parlor was super, effing busy this week.  With the monsters at home bothering me all the dumb time, I just wasn’t in the mood.  But it was so much fun when these ladies stopped by:

I just love them! It’s impossible to be pissed off around those two.

Oh and you may be wondering where G was during all of this stuff.  Well, he’s partying it up with a bunch of topless chicks in New Orleans for Mardi Gras.  Happy Valentine’s Day to George!  I’m at the airport now and will be in New Orleans tonight .

And no, I won’t be one of the topless chicks.  New Orleans, you’re welcome.

This entry was posted in Uncategorized. Bookmark the permalink.

2 Responses to It was only a few days…