2. If 2014 was the year of spending (and OMFG, it was), 2015 will be the year of…umm,  not spending? Knowing that we were going to tailor our spending a bit, I kind of went a little crazy at the end of 2014.  I bought a Vitamix and G bought a new subwoofer  for the tv . Then I bought this beautiful thing:

I know, I’m officially 100 years old.  I bought a Fitbit last year and love it.  I really like to hit 10,000 steps a day and some nights I would walk in circles around the house or jog in place just to hit that dumb number. I started looking for an alternative to walking in circles and came across rebounding (aka jumping on a mini-trampoline). I got the rebounder last week AND IT IS THE MOST FUN AND AMAZING THING EVER.  I don’t know about you, but I think jumping on a trampoline is pretty great. After a bit of research, I found that this one is the rebounder of rebounders (it’s a Bellicon).

I didn’t tell G how much it cost until after I bought it (it’s expensive). Super supportive G’s response? “I hope you don’t lose interest in a day.” Ha! So true. But, a week later, I still think it’s really dang fun! I’m sure G hates hearing me yell about how fun it is when I’m jumping on it, but it is. And apparently, it’s really good for your lymphatic system…whatever that is. I haven’t really worked out on it (there are a lot of DVDs and YouTube workouts), I just jump. And G and I still go to the gym. Stop by if you want to try it out!!

3. Our microwave broke on December 30th. It was more than eight years old so I wasn’t that surprised, but sh*t, we’d just spent a billion $$ on so much other important stuff. Our old microwave was the kind that sits on the counter and we decided long ago that we’d get one installed over the stove when that one broke.  Yesterday, this bad boy was installed: 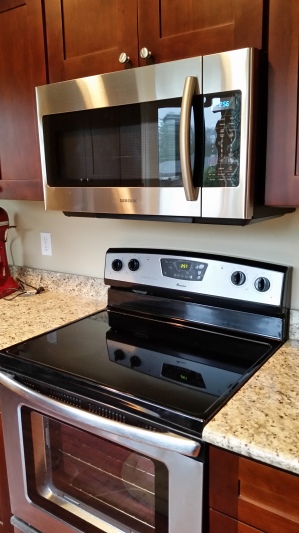 Isn’t it beautiful?! Yes, I realize I just aged myself another 25 years by being so excited about a microwave.

4. I’m still working the part-time pizza delivery job, but I changed my schedule so I only work four days/week for 15-20 hours. I’m now the oldest girl employee (the only older one moved to a different location) so my coworkers call me “Grandma.” It’s pretty cool.

5. Have you read The Subtle Art of Not Giving a Fuck? FYI, the f-bomb is used throughout…maybe even 127 times. PARTY TIME!