When G and I planned our trip to San Francisco, I informed Uncle Daniel that we would need to have cake to celebrate our anniversary.  I had no idea this meant that we would actually be making a cake.  And I definitely had no idea the cake would be so f*cking good.

Daniel is such a good planner that he had everything ready when I got there.  The cakes were baked (and cooled) and the custard filling was already cool and ready to be mixed with whipped cream.  We just had to make the frosting and assemble it.  I asked George to take pictures of Daniel and me in the kitchen and, whoa, he got some really f*cked up excellent pictures of me.

I think I’m whipping the cream to combine with the custard starter stuff <— obviously, I’m a baking expert.

Daniel and I read through the recipe (I read each recipe about 800 times because I didn’t have a clue what I was doing), 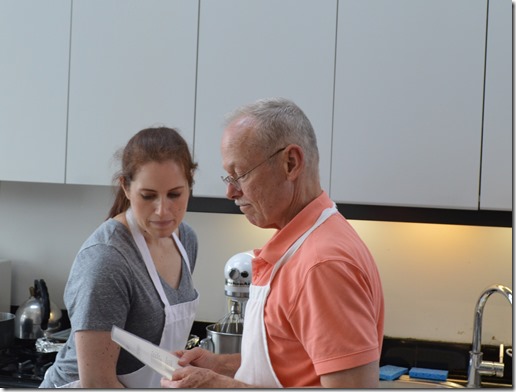 we looked for stuff, 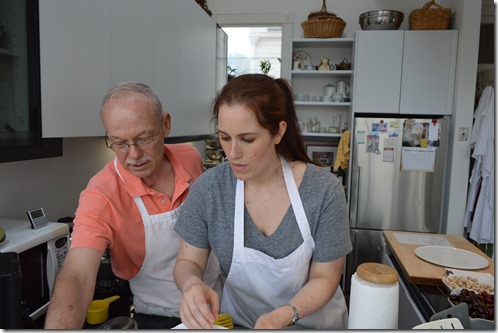 and I adjusted my apron.

I made a weird face while Daniel looked in his (incredibly organized) file drawer of recipes: 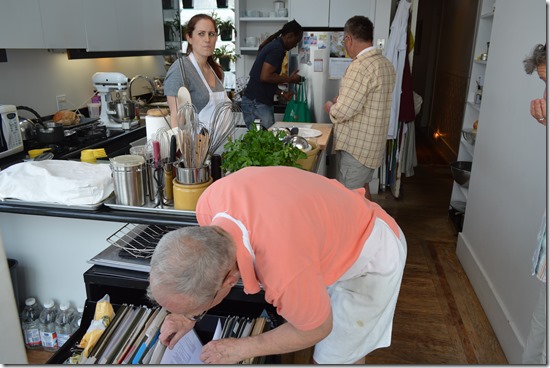 I should have taken a picture of some of the recipes because he types them out with the ingredients on the left and the instructions on the right.  It makes it a lot easier to see how everything goes together.

And made a weird face: 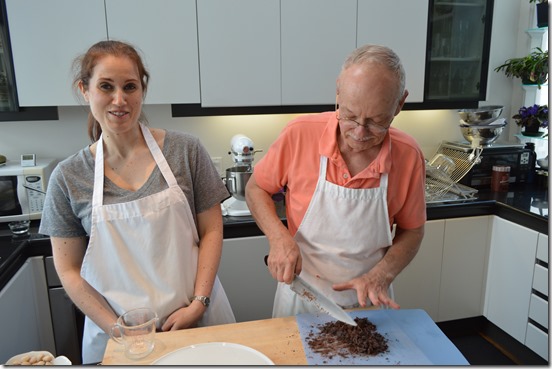 When I saw the pretty cakes, I sang to everyone!

Not really…I don’t know what I’m doing in that picture.

Mack decided it was time to help me supervise:

Then I told Richard about how cakes need to be flat on top.

And then we tasted the Fluffy White Frosting.  It’s really called fluffy white frosting and it is so damn good.

Spreading out the custard filling: 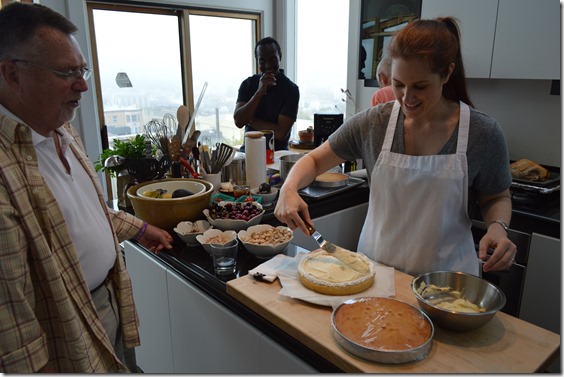 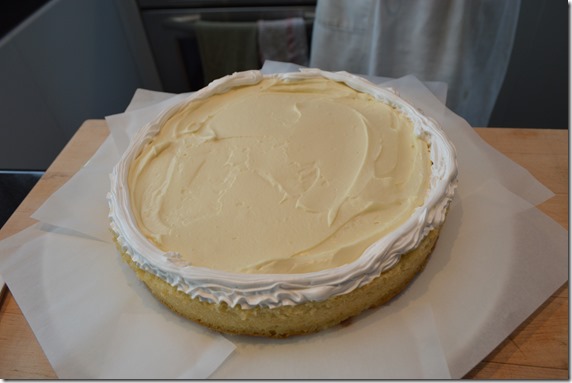 Time for a second layer: 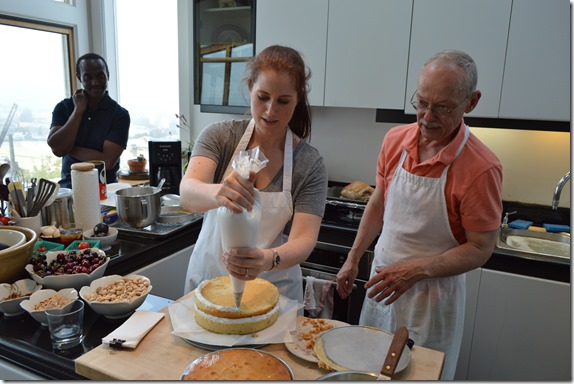 Time for another weird face:

Time for the FLUFFY WHITE FROSTING!!! 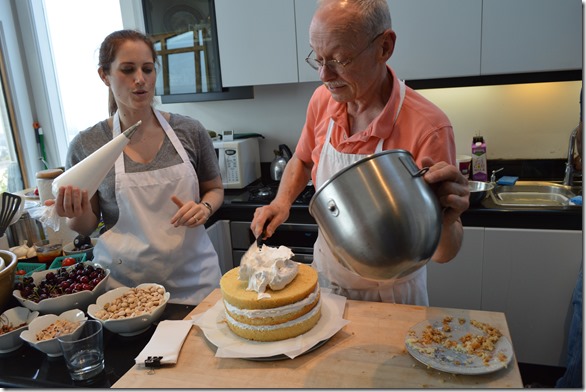 More supervising by both Mack and me: 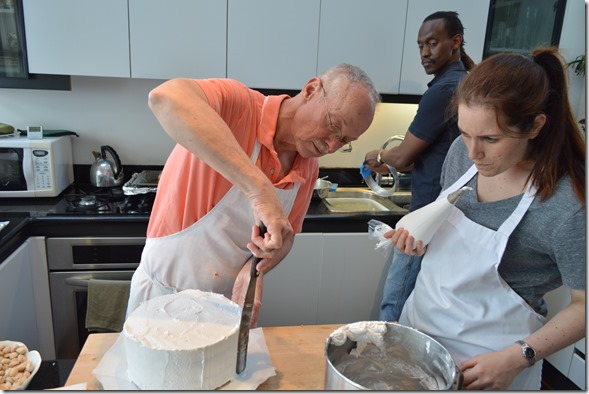 A weird face and a cake with a bit of decoration!

I’m pretty sure I make that face all the time because those lines on my forehead…are permanent.

And now, time for me to attempt to frost:

I think the sugar got to me: 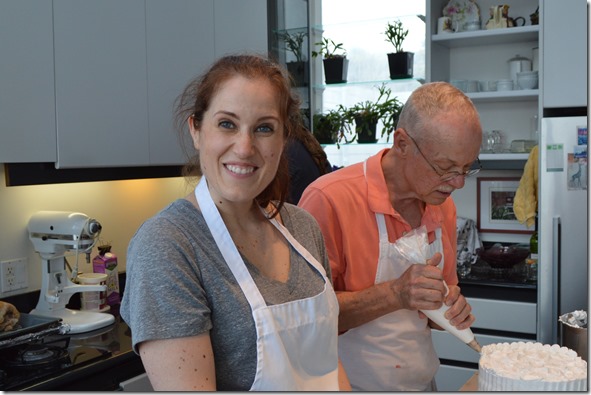 Then I gave a frosting lesson to Richard and Candi:

Oh and then we added chocolate!!! 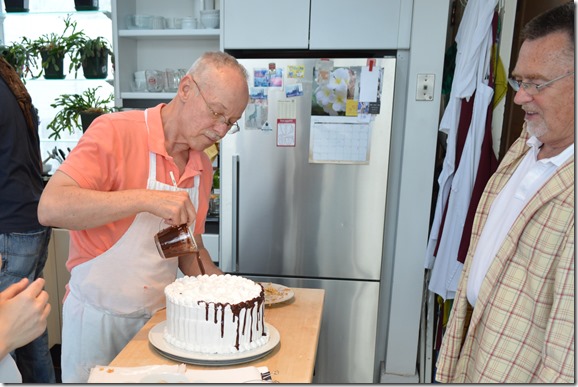 The chocolate was something like 99.99% cocoa so it was not sweet at all.  But it was perfect with the super sweet frosting.

And I got tired of G having the camera.

When you’re married eight years, you don’t have to make eye contact anymore.

And the most beautiful and tasty anniversary cake ever!

I mean, look at that chocolate and frosting! 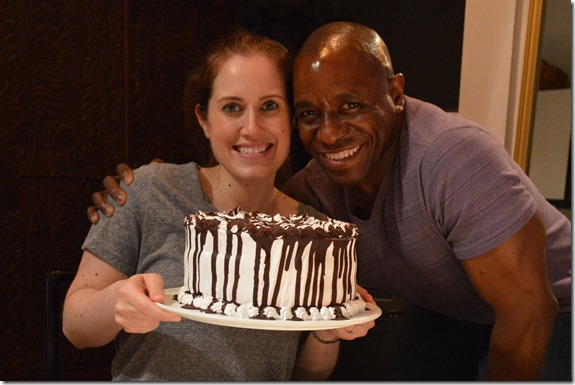 This entry was posted in Baking, Friends, Travel. Bookmark the permalink.

3 Responses to The Anniversary Cake