June is a busy babysitting month for us because my sister’s husband is out of town and they need some extra help when Em  goes to work and Kennedy’s daycare isn’t open.  So last night, we had our first adventure!

I picked up Kennedy (along with about 12 bags of kid-sh*t…how can a baby have soooo much stuff???) and went back to the house where we waited for G to get off work.  Lately, Kennedy starts crying every time she sees G, so we were really happy when this happened:

Apparently, all it really took was for George to show her his bling.  Lesson #1 for Kennedy: Just because a man has nice jewelry does not mean that he has any money.  Exhibit 1: George.

We gave Kennedy a bottle before we left, packed the stroller full of about 1 million things, debated about whether we should leave and then braved the big, bad world all by our idiot selves. 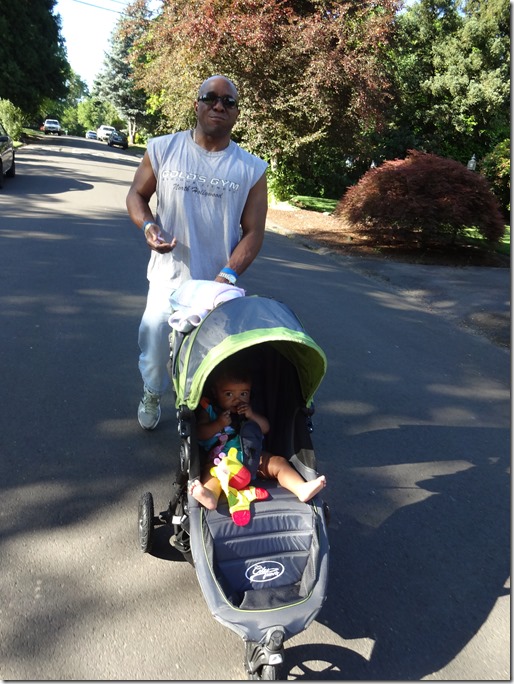 Is it just me or does Kennedy look concerned?

George insisted on pushing the stroller, even when he ran it right into the curb.  We are so good at this stuff.

We made it to downtown and there was a “first friday’ event going on.  I guess the businesses stay open late, music’s playing and there’s even free food!!!

We went to a bakery and got strawberry shortcake!

While George was super happy about the free dessert, Kennedy was pretty bored by all of it:

George was so busy stuffing his face with dessert, I got to push the stroller!!

We were only gone about an hour, but it was so nice to get out of the house.  Kennedy was still sleeping when we got back so we left her in the stroller…even when she woke up:

She’s not allowed to watch tv, but by leaving her in her stroller, we could watch the French Open (way to go Serena!!!) and still entertain Kennedy.  God, we are such good babysitters!!

But I think Kennedy liked the set-up!

After she got bored with that arrangement, we tried to take a family photo…

But that didn’t quite work out.  Next time, Kennedy, next time.