Remember last year when I went to the Dosha VIP event  with my friend, Lea?  Dosha is a salon and spa in the Portland area and every December they hold VIP events where they serve food, wine, have specials on products and give out discount cards that get you 10% of products and services in 2013.  So yeah, I needed to make sure I picked up my VIP discount card for 2013.  Can you believe it’s almost 2013?  Neither can I.

Anyway, as luck (or days of planning) would have it, I met these two fine girls in Portland: 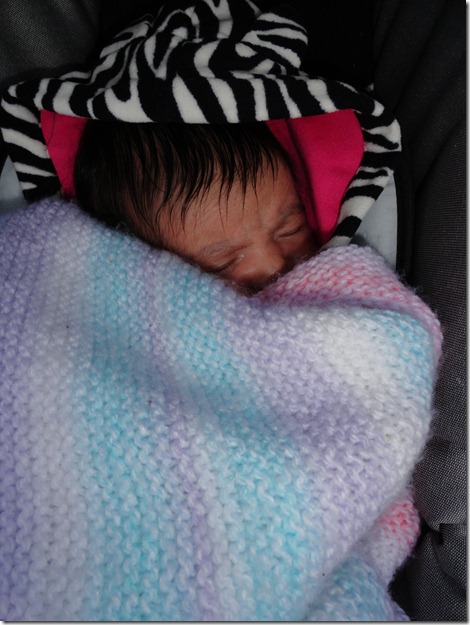 Because of a mix-up, Em had to bring Kennedy in her car seat and carry her all around Portland in it.  Anyway, after Em burned about 4,000,000 calories dragging the adorable Kennedy around, we decided to head to Starbucks… so Kennedy could refuel.

I also took this picture of Kennedy and me…

I didn’t realize I had that girl in the background until I got home…sad.

After Em fed her, she sh*t her pants (Kennedy, not Em).  Time for an adventure in the Starbucks bathroom!!  Fortunately, Kennedy didn’t mind the whole thing too much and I think she enjoyed hearing me b*tch about the entire process.

But we finally managed to get Kennedy in the Baby Bjorn: 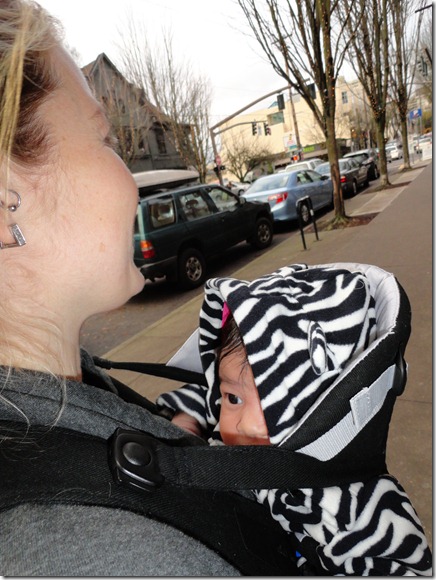 I love her cute, damn coat!!  I’d get one, but I’m pretty sure someone would try to put me in a zoo (or shoot me) because I’d be the same size as a real zebra.

I know you’re probably surprised (I know I am), but we actually made it to Dosha!

I think Em was tired of me taking pictures of her.  Sorry Em.  So we filled out our little forms and got our cards!

Last year, I ended up buying some Smashbox eyeliners, but the prices weren’t as good on the specials so I didn’t buy anything.  And my heart broke.  At least I’m still a VIP.

This entry was posted in Family, Nails, Obsessions. Bookmark the permalink.