When You Have Too Many Tomatoes

Okay, so you know how I said I love getting tomatoes from my friends?  Well, things have gotten a little crazy around here and I had waaaaay too many sitting around.  So tonight I used about a billion of them up in one recipe.  And I think the whole dinner cost about $2.

Anyway, I started with some olive oil and garlic in a pan:

A lot of garlic, maybe a tablespoon or two of olive oil.

I added some onions:

And threw in a random jalapeno I got from my friend, Keri.

I let this mixture cook down while I cut up about 4 billion tomatoes. 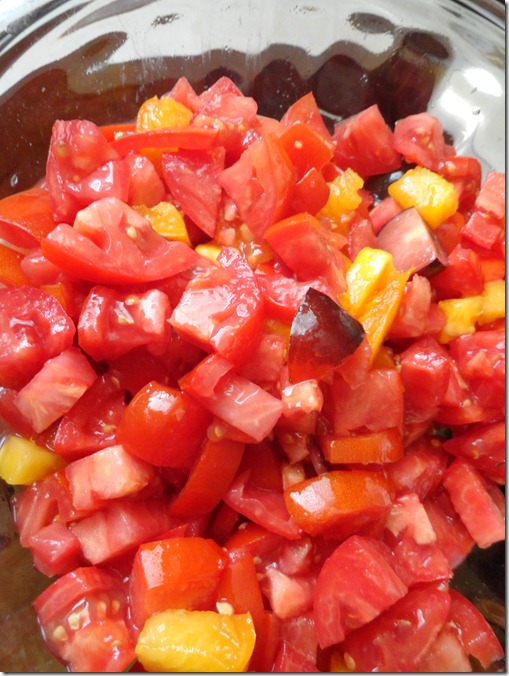 I just cut up everything I had…heirloom, cherry, regular, orange, yellow, I-don’t-know-what-the-f*ck-kind of tomato.  If it was there, it went into the mixture.

The onion mixture cooked down quite a bit while I cut up the tomatoes, so when I was done, I just threw them in the pan:

Doesn’t it look pretty?  I poured some salt on the whole thing and cranked up the heat.  A few minutes later, it looked like this:

I cooked a box of whole wheat pasta and added it to the sauce:

For whatever reason, I think that picture’s funny.  Anyway, I mixed everything together and it was ready!

I meant to add basil, but I forgot.  The green would have been pretty.  Instead I just covered it with cheese. 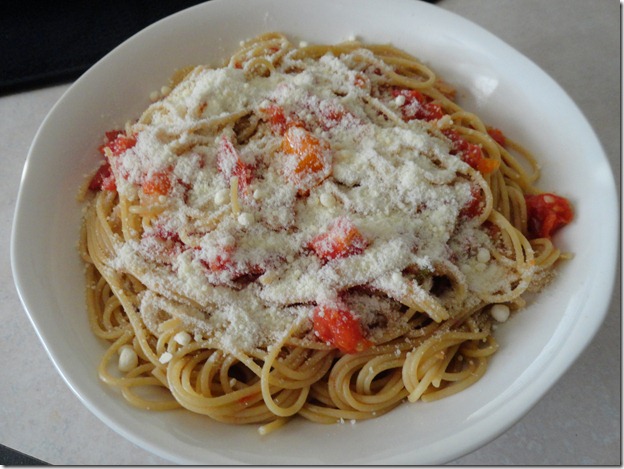 Anyway, that’s how I used up about a billion pounds of tomatoes.  And it was actually pretty terrific.

This entry was posted in Eating, Friends. Bookmark the permalink.

2 Responses to When You Have Too Many Tomatoes