On Sunday, we participated in our 3rd Prost8k race!  And for the third year, we did the race with these peeps: 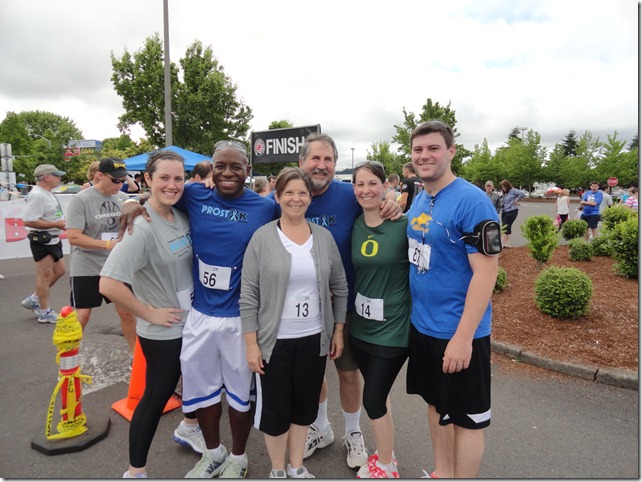 That’s me, George, Kathleen, Steve, Marissa and Cody.  I work with Steve, Kathleen is his wife, Marissa is his daughter and Cody is Marissa’s husband.  A great group of people.

While Steve and I are coworkers, he really only talks to me because he’s in love with George. 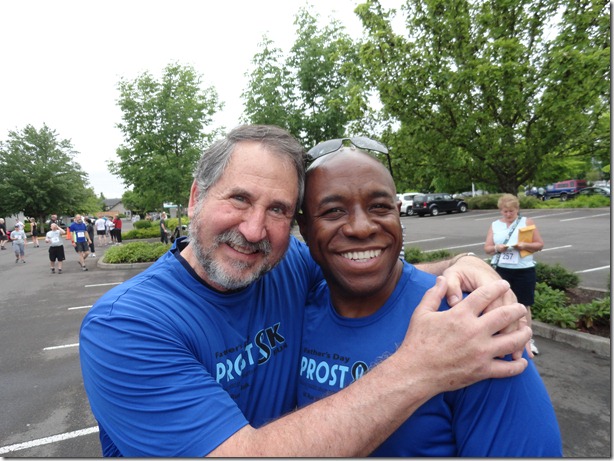 They have a very strong bond because they both really enjoyed getting prostate exams.  They are now very sad that they had their prostates removed and no longer get to have those exams…although apparently Steve still asks his doctor for prostate exams all the time.

Fortunately, I was able to pull G away from Steve for one picture of us together. 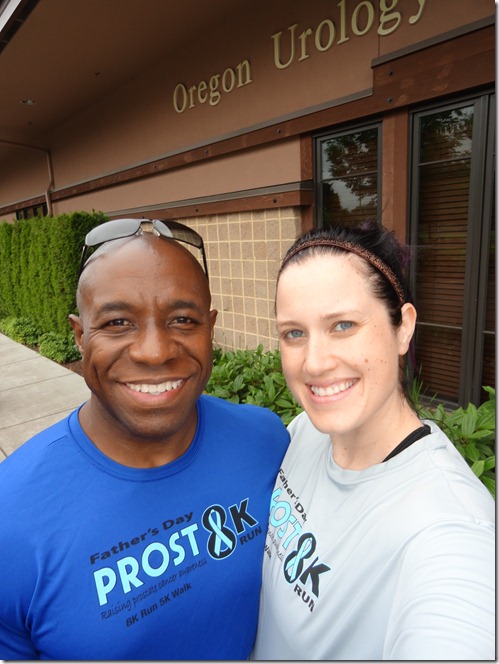 Just like last year, the prostate cancer survivors wore dark blue shirts and the rest of us wore gray.  It’s great to see all these guys running and walking the course and it’s fun to cheer them on.  George really likes the part when they get all the survivors together for a group picture. 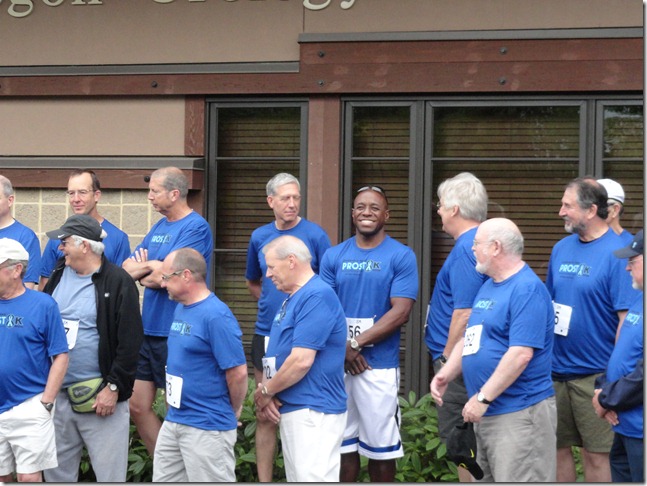 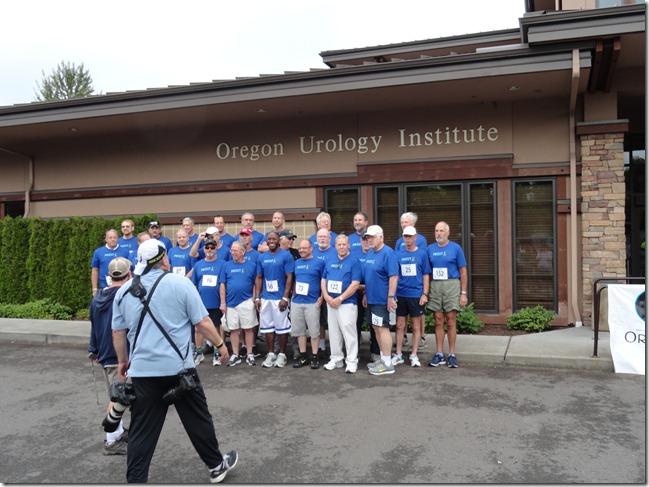 And then G got interviewed by a local tv station!! 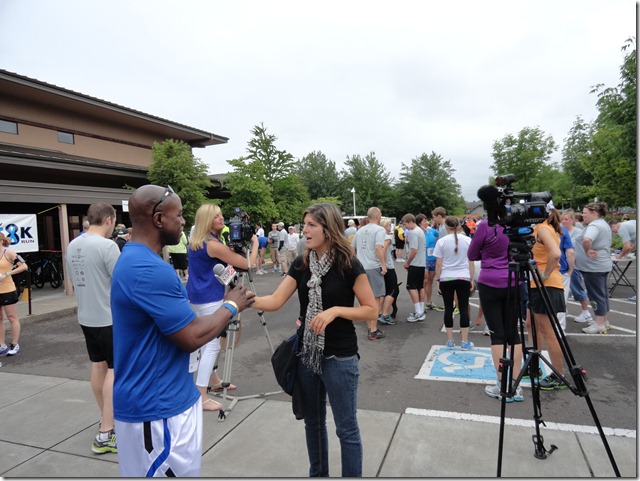 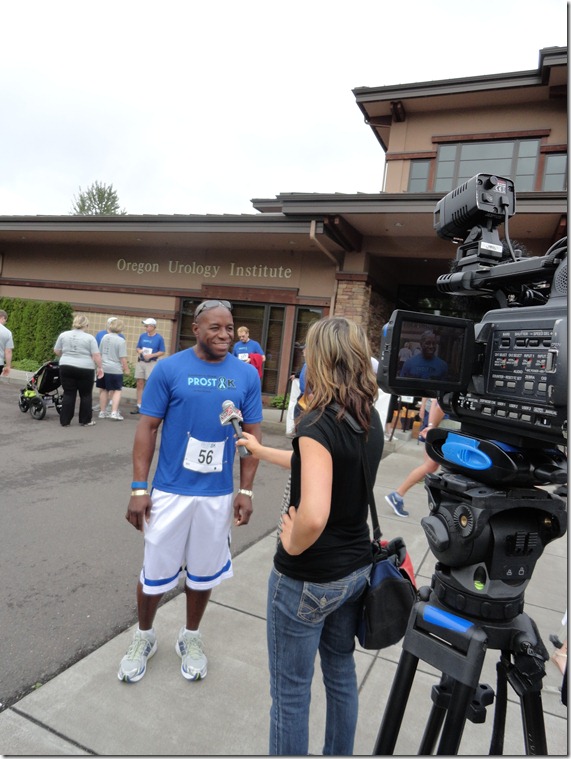 We don’t live in Eugene so we weren’t able to watch the local news, but we heard that G made it on TV and did an excellent job.  I think it’s time to start sending out autographs.

Finally it was time to run the race!  I planned on doing the 5k, but I ended up missing the turn around, got lost and walked the last 1.5 miles with Kathleen.  Sad (and a bit hilarious) times.  After the race we headed over to Steve and Kathleen’s to hang out and eat!!! 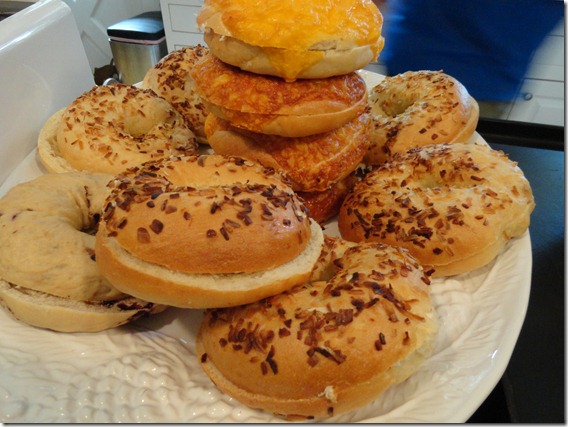 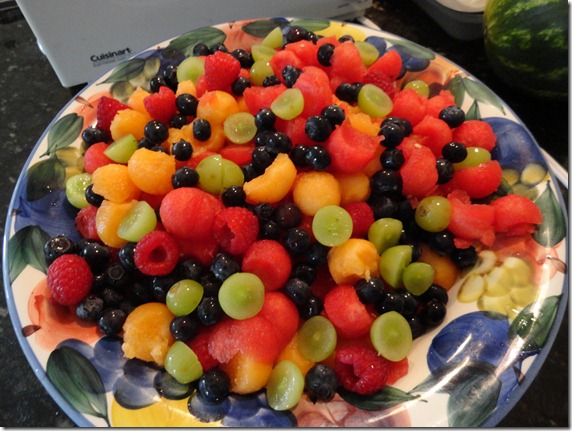 And of course I brought some cake and Oreo pops! 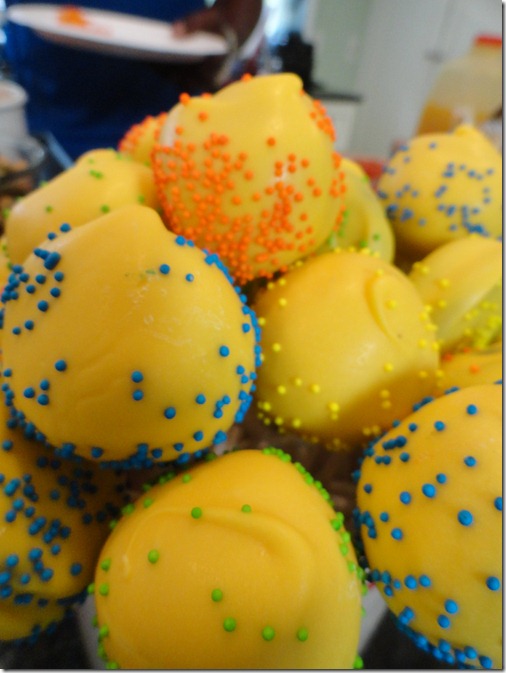 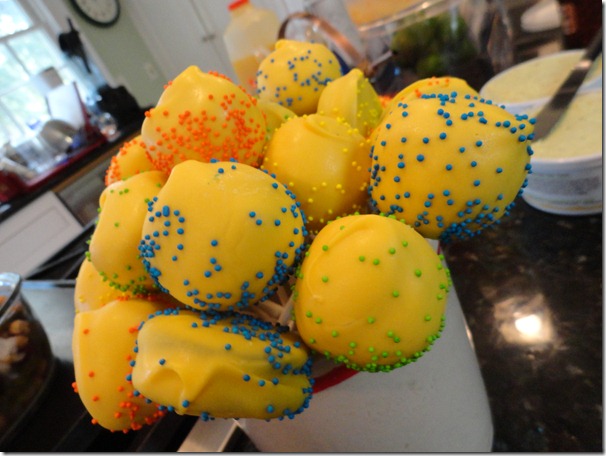 And I loved the fruit flavored water, too. 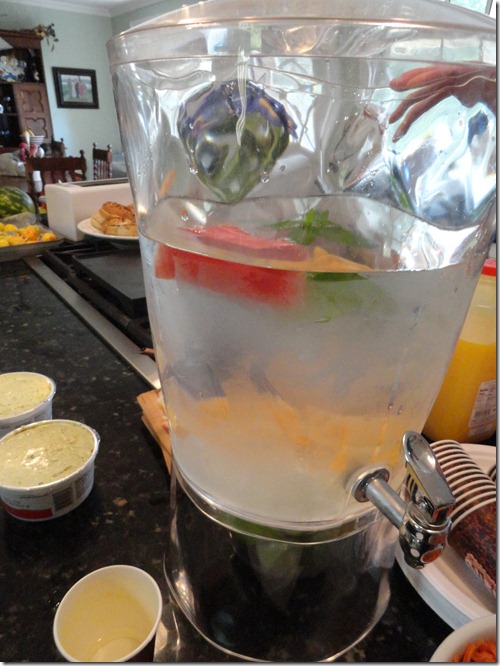 Way fancier than drinking out of the tap like we do in South Jesus.

There was quite a crowd at Steve and Kathleen’s, but we got a bit distracted by the wildlife: 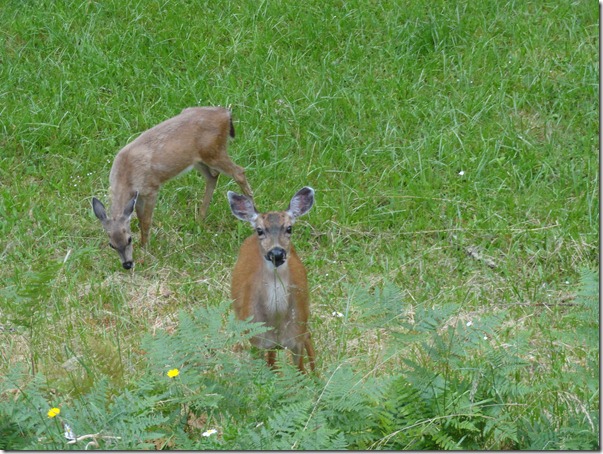 There was a deer and her two babies eating right in the backyard! 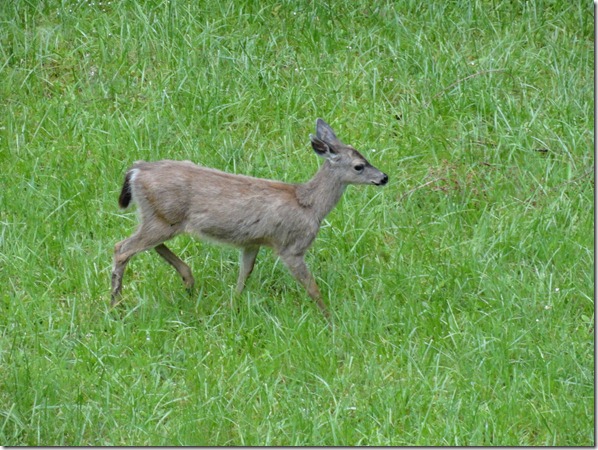 And then a little later, we saw this cute guy: 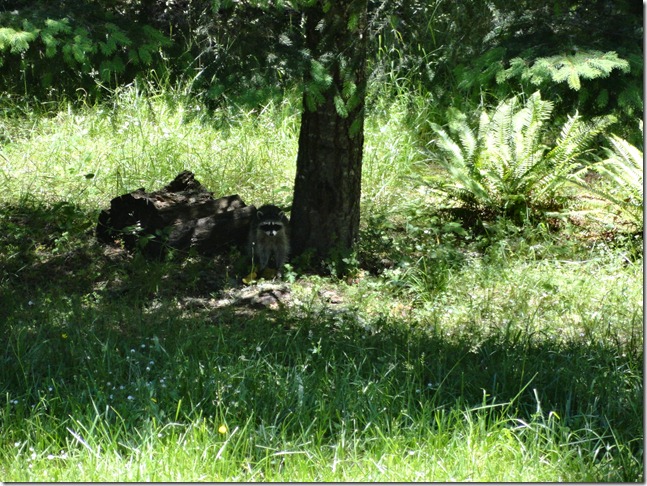 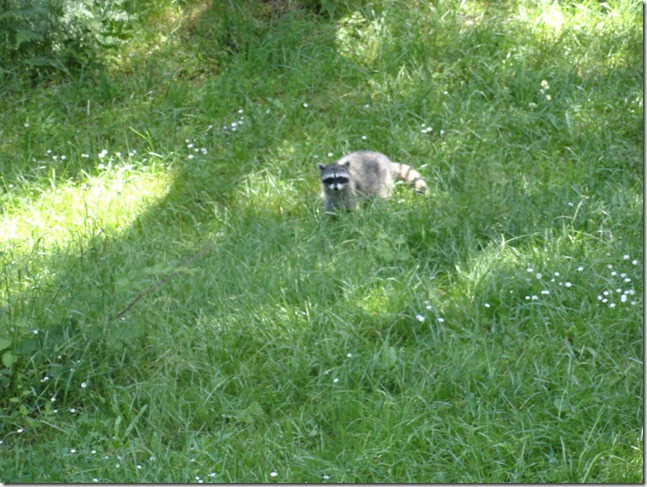 I tried to convince Steve and Kathleen to adopt the little raccoon, but they said that Bailee would get jealous. 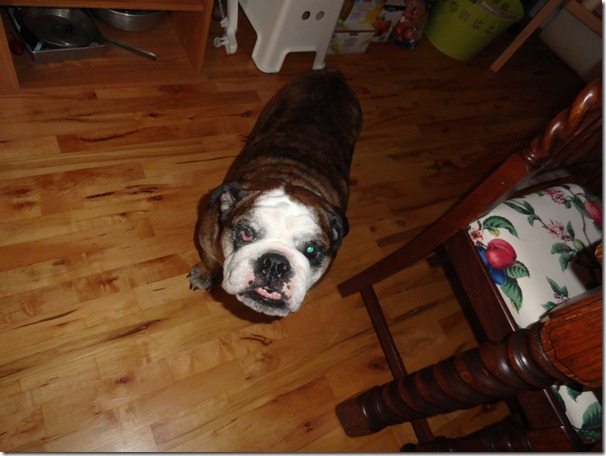 After taking pictures of all the creatures around, I took more pictures of me and G.  Obviously, I have problems. 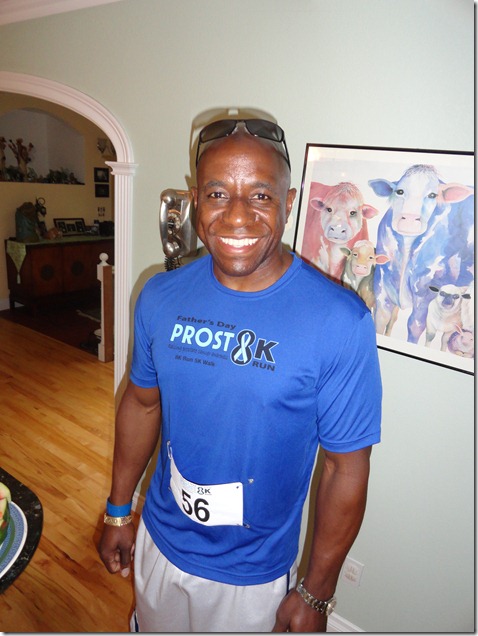 I thought it was funny that G was still wearing his race bib 3 hours after the race.

And then I was able to convince one of Steve’s grandkids to take a picture with me. 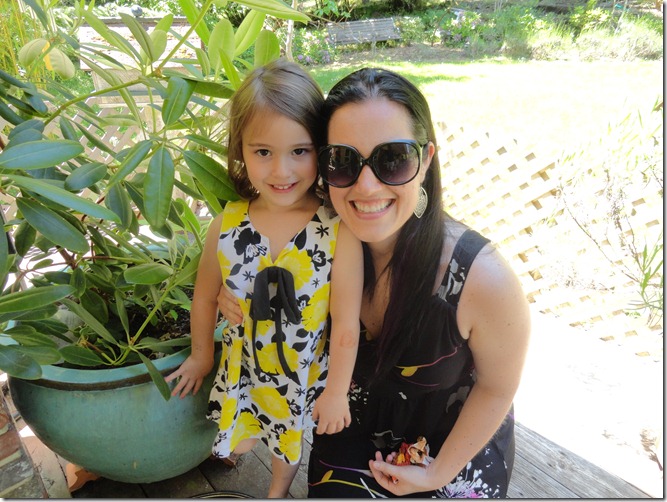 Natalie wouldn’t go near G!!  Thanks Natalie, you are adorable.

We had such a good time with everyone on Sunday…thanks Steve and Kathleen for hosting such a great get together!

This entry was posted in Eating, Friends and tagged Running. Bookmark the permalink.