After my sister got married, a bunch of people went to the Japanese Gardens 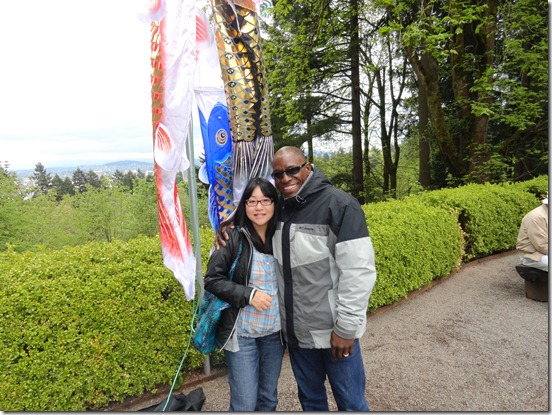 and Tomoe got stuck with George.  Poor Tomoe.

While everyone was there, my mom and I got ready for the celebratory dinner.  I guess it was like a reception, but there were only 14 people so I’m going to call it a dinner.  Or the after-party.  We booked a private room at the Multnomah Athletic Club, which is also where G and I got married and had our reception. 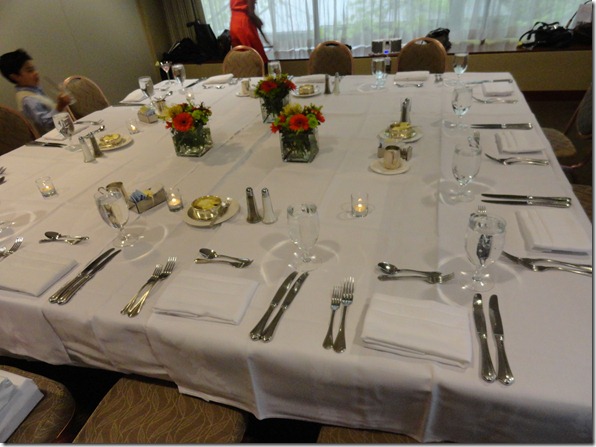 I helped Em and Toya get ready for the dinner.  I had to flatiron Toya’s hair and that was quite an experience.  I was afraid I was going to burn all her hair off, but I just went with it. 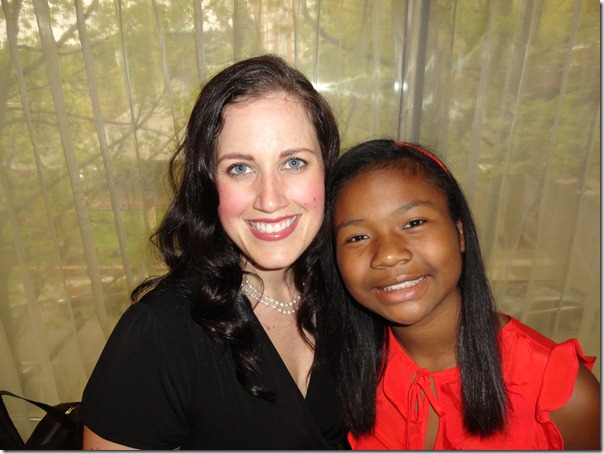 And it turned out okay, I think.  On the other hand, my hair looked like sh*t so that was nice.  I did Em’s makeup, but forgot to bring my lip stuff with me when we got ready so I had to add lips when we got to the room. 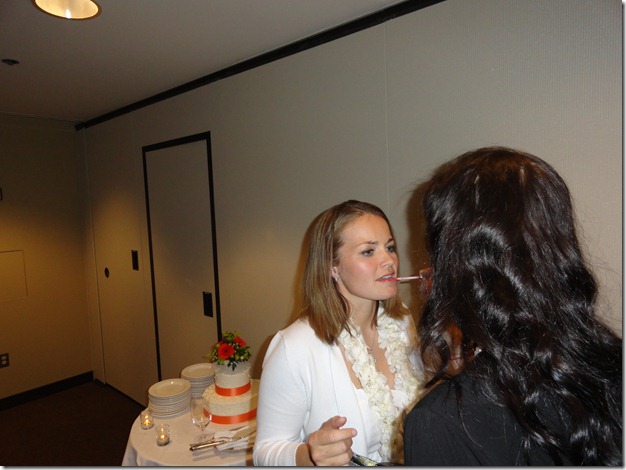 A sister’s work is never done. 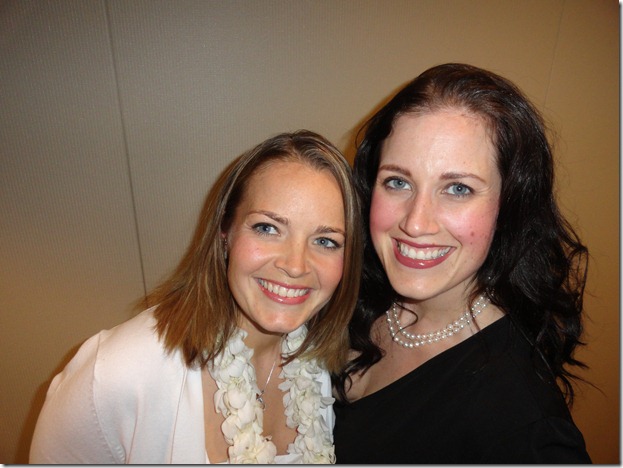 I was designated as the photographer so I went balls to the wall…and mostly took pictures of myself! 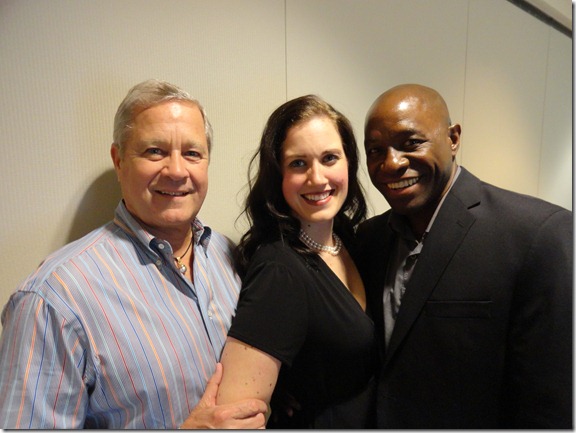 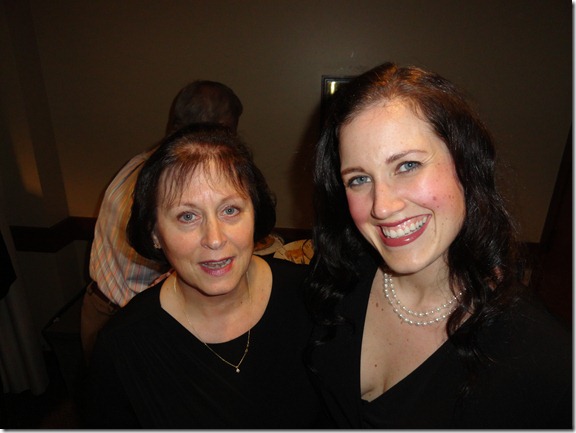 That’s my dad’s sister, Judi.  I feel bad for her because she grew up having to deal with my dad as her brother.  It’s amazing she still has arms and legs.

Eventually, I got around to taking pictures of some other people. 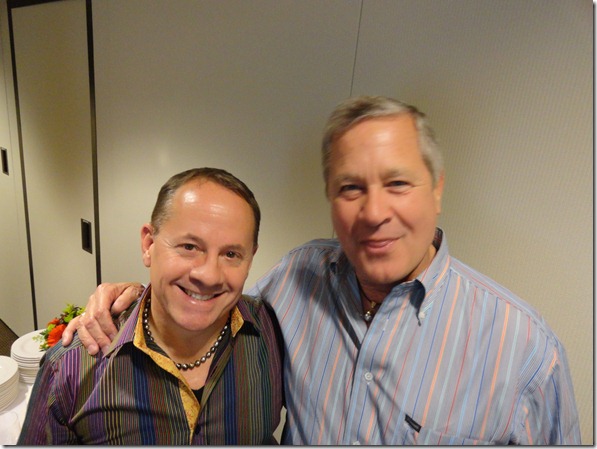 My dad wouldn’t stop talking long enough to let me take a picture of him.  At least Jon looks good! 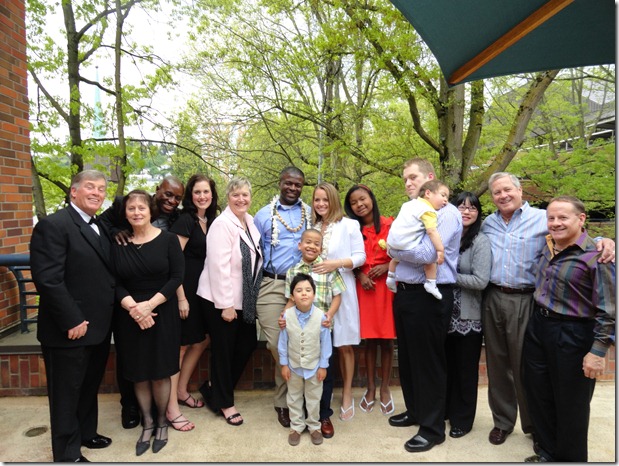 That’s the entire group. My Uncle Keith and Aunt Judi (on the left) were on their way to a super-fancy event so they were only able to stop by for a few minutes.  It was great to see them, though. 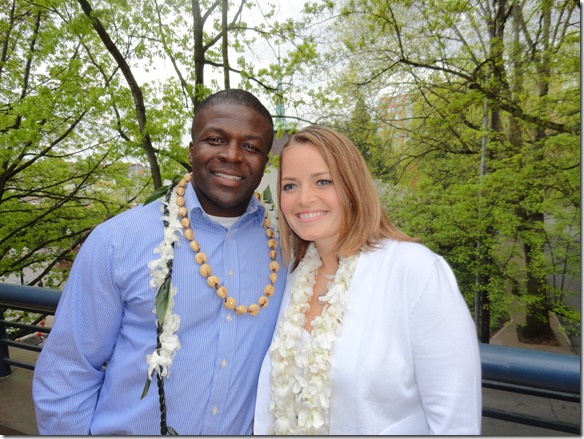 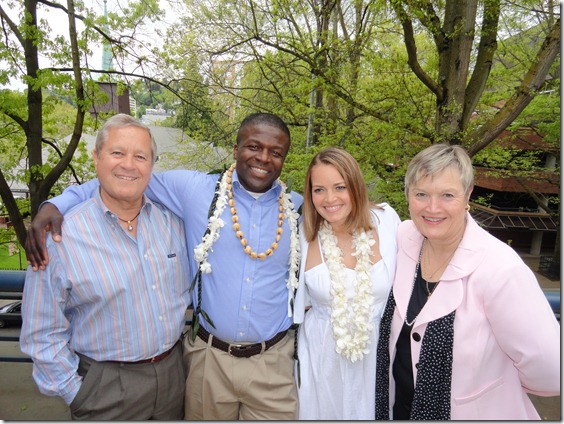 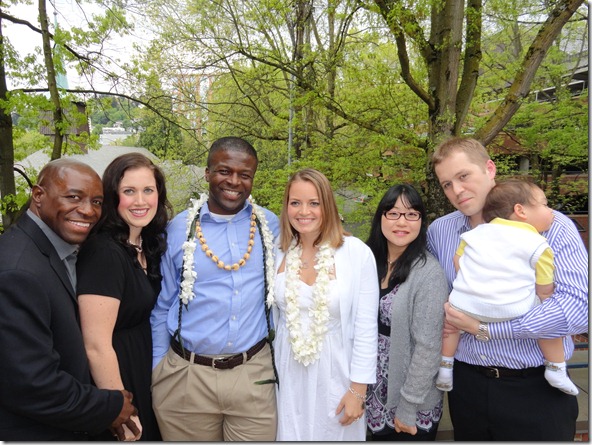 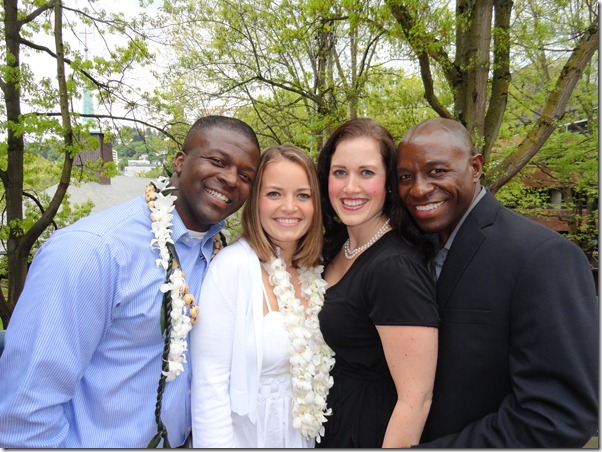 That’s one of my favorites…the Double Stuffed Oreo. 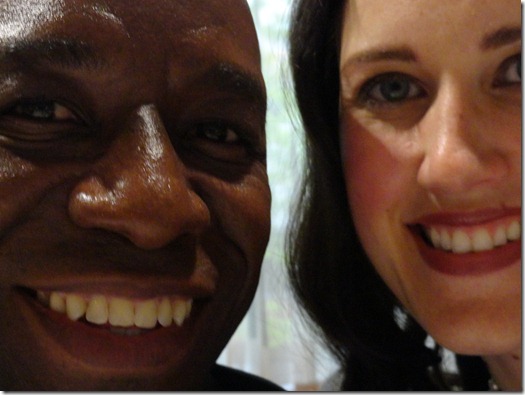 We had a mishap with the zoom.  I love this picture.

So after our photoshoot outside, we sat down for dinner. 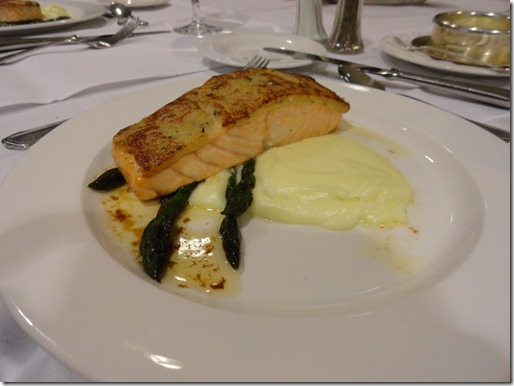 Which was pretty amazing.  Salmon, mashed potatoes and asparagus.  It was good.  And then it was time for toasts.  My mom and dad both gave toasts, which was nice.  Then I gave a toast, which was the best. 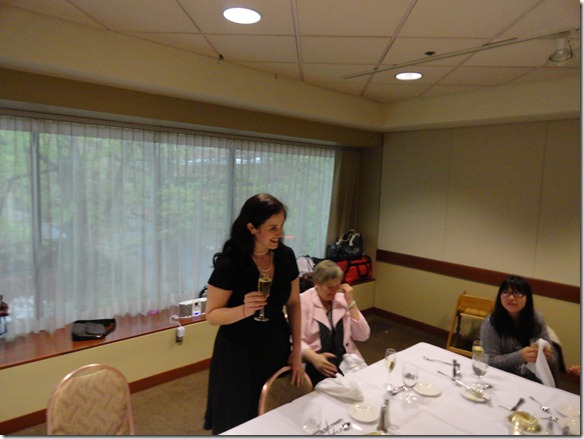 I’m not quite sure what I said, but I gave them a gift that everyone should receive at a shotgun wedding. 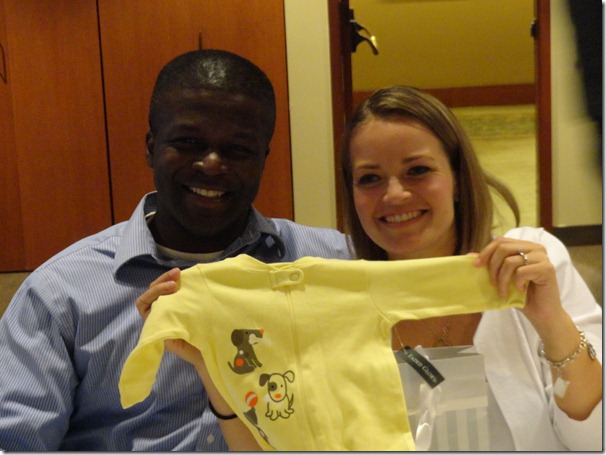 A onesie with dogs on it!  Isn’t that what every newlywed wants?!!!

G and I also loaned them our wedding song, What a Wonderful World by Louis Armstrong, so they could have a first dance. 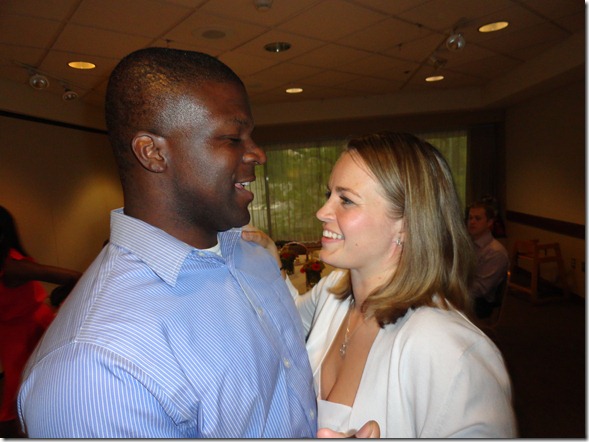 We played it twice so we could dance to it too. 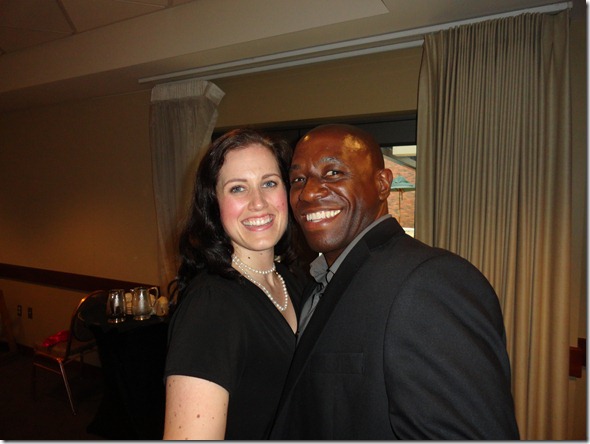 After dinner, toasts and dancing, it was time for the best part. 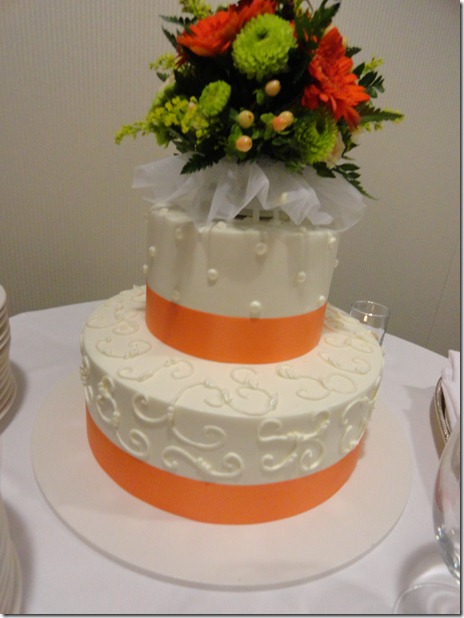 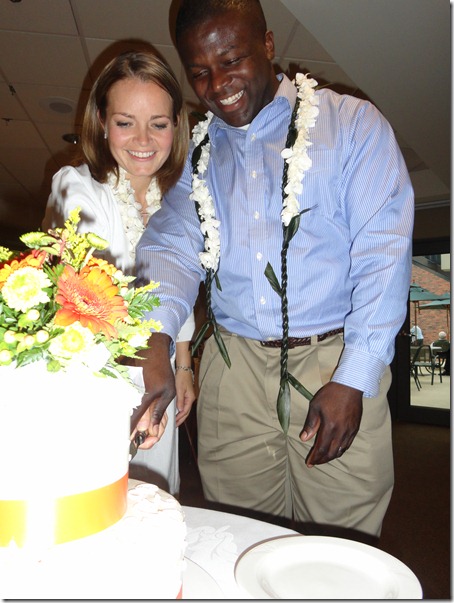 George ate about 5 pieces and grabbed one piece (with his hand) as we left that night.  You can never have too much cake.

We had a great time celebrating with everyone.  Congrats, Emily and Jamison!!

Bring on the baby.

5 Responses to The After-Party