My sister got married on Saturday.  She knew she was getting married and it would happen around 12:00 pm, but she didn’t know how it would happen.  Jamison, the soon-to-be-husband, planned the ceremony and told us when (and where) to show up.  My sister is brave.  I would never let G plan our wedding…probably because it would end up looking like we were in the ‘80s and there would be a lot of gold involved.

So Saturday morning, G and I headed to Portland.  As I may have mentioned before, Emily, Jamison and my brother are all in the Bridge City Paddling Club in Portland.

As luck would have it, their coach is an ordained minister AND they had paddling practice on Saturday morning.  They were doing time trials on the rowing machine that morning so they were inside a building on the waterfront.  The family arrived at around 11:00 am and waited in a hallway for about 15-20 minutes.

My dad and Jon had the brilliant idea to bring leis for Emily and Jamison to wear during the ceremony.

When the wedding was about to happen, we were told to go outside and wait.  Mom and dad got ready with the leis. 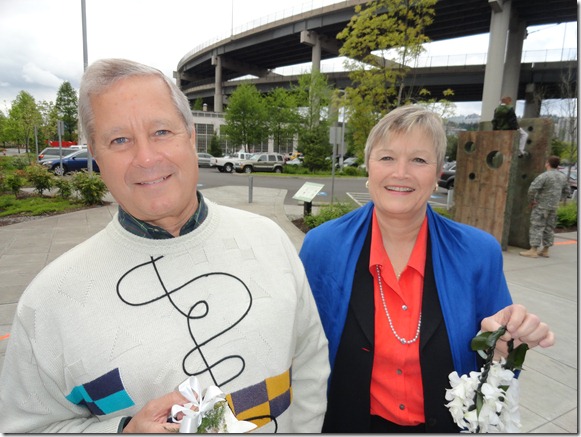 And then the rest of the team started to pour out of the building.

There was quite a crowd, which was exciting.

And then the couple came out…with Toya blocking our view.

When Em realized it was happening, she just kept laughing.  When I get nervous, I do the same thing.  Laugh…to myself. 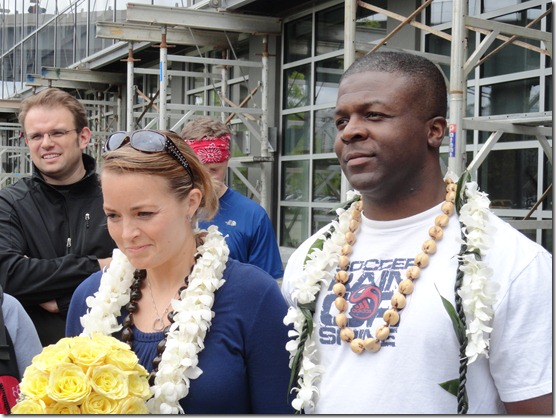 And a teammate gave Em a bouquet of flowers in the team colors…yellow flowers, blue ribbon.

Some people got a little teary-eyed…

Tomoe, I’m talking about you.  And Kai was looking ADORABLE…as usual. 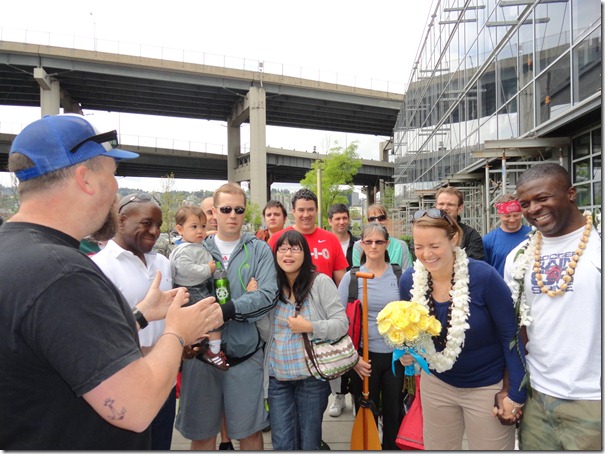 I don’t know what was said at this point, but Em liked it so much, she almost sh*t her pants!

There were a lot of paddling analogies throughout the ceremony.  Something about the beginning  being the most difficult part, and how the middle can be a challenge, but you’re committed for the entire race.  And that was cool.  AND SO TRUE.

They said their vows…

And laughed some more.

And kissed…gross, but something you have to do when you get married.

And they jumped two paddles!  Everyone cheered.  It was a great wedding, they had tons of friends and family present and I think it was perfect for my sister.  She’s never been the traditional one and always more of a tom-boy.  As chaotic as things were leading up to this, it went so well.

I don’t think Em could believe it all happened. 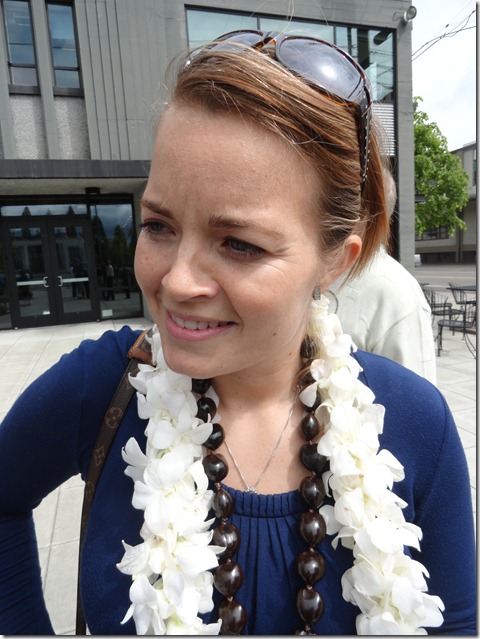 While they were being congratulated by everyone, my mom, G and I snuck off to decorate their car.  My mom had the brilliant idea to buy a car decorating kit!!! 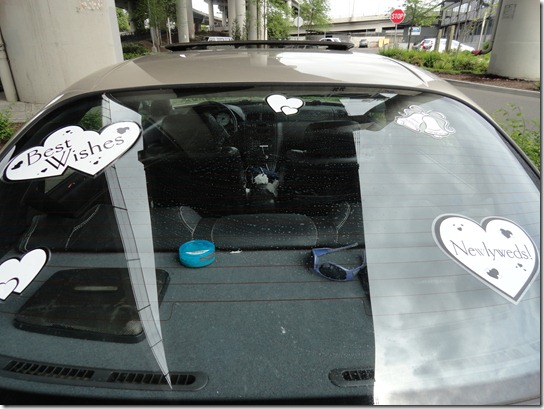 It came with streamers, decals, some plastic pom-poms and a metallic “Just Married” sign.  We tried to put on as much as we could.  G shoved all the pom-poms through the sunroof and I arranged the decals.  We tied streamers to the spoiler and the side mirrors…is that legal? 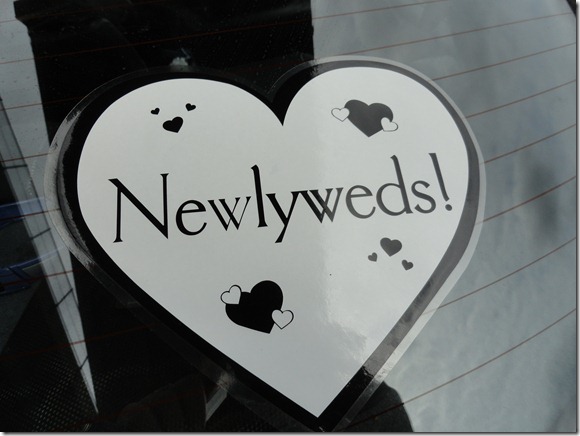 It was a great ceremony…and then it was time to prepare for the reception.

9 Responses to The Surprise Ceremony