Why?  Because I made something healthy for dinner last night.

I know, I hope you don’t sh*t yourself out of shock.  I was pretty proud of myself.  First I made Crock Pot Bolognese Sauce from skinnytaste.

And because we were being extra healthy, I baked a spaghetti squash to go with it!

It was the first time I tried baking it whole and that worked pretty well.

After gutting the squash (we each got half), we had some pretty good sized portions. 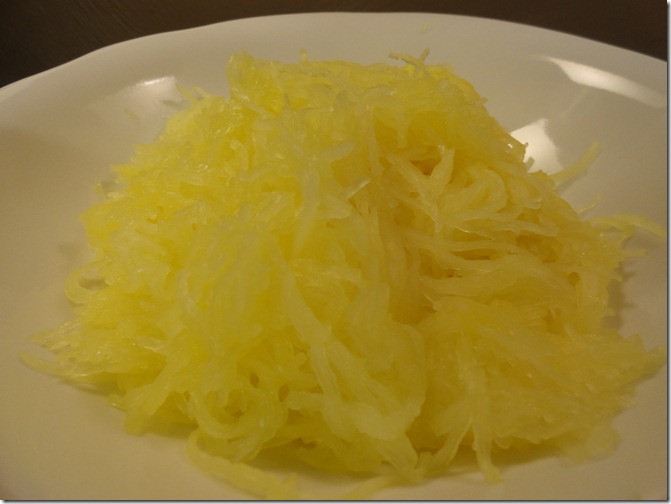 And after adding the bolognese sauce, it looked incredible.

After gorging ourselves on our healthy dinner, we headed to the local high school for a basketball game.  In order to feel like I was working out, I did some serious reading:

I mostly just looked at the pictures so the only thing I learned was that my muscle to fat ratio is way f*cked up…way too much fat and probably no muscle.  Sad.

While I imagined myself with tighter thighs, G ate more food.

G was excited about the game because of the team we were playing.  When we went to this game last year, G got to have his picture taken with this guy:

That’s Michelle Obama’s brother, Craig Robinson.   He coaches the men’s basketball team at Oregon State and his daughter plays on the high school team over there.  I did not want to take that picture.  G stalked Craig all night and it was getting so bad, I thought Craig was going to call Obama.  Fortunately, we didn’t get arrested and the Secret Service didn’t show up to last night’s game either.

This entry was posted in Eating, Sports and tagged Balls. Bookmark the permalink.

7 Responses to Brace Yourself