By the last night of our cruise, we were all pretty tired.  But we rallied and tried to enjoy as much as possible.  Every night there was karaoke and a couple of nights we watched the incredible (and most of the time ear-splitting) performers.  Carla is a big-time karaoke pro so she was up there singing and dancing with her friends and with her kids. 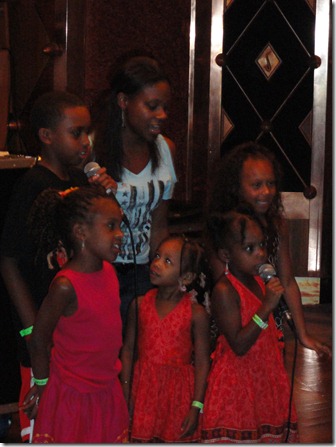 I’m pretty sure they were singing Taio Cruz’s “Dynamite”… 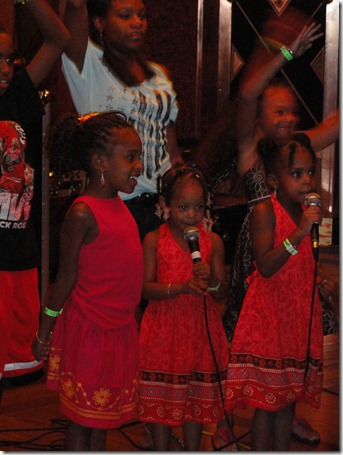 Yep, they’re throwing their hands up in the air (sometimes, saying ayo, gotta let go…sing it!).  I really wanted to sing too, but I only know inappropriate songs with a lot of swearing.  Apparently those are not allowed on family-friendly cruises.

That night, I ended up singing in my chair and talking to the only person left on the cruise who I hadn’t offended.

That’s right, my four year old niece, Carsyn.  Thank god this kid lives in Chicago or I would have some serious baby fever issues. 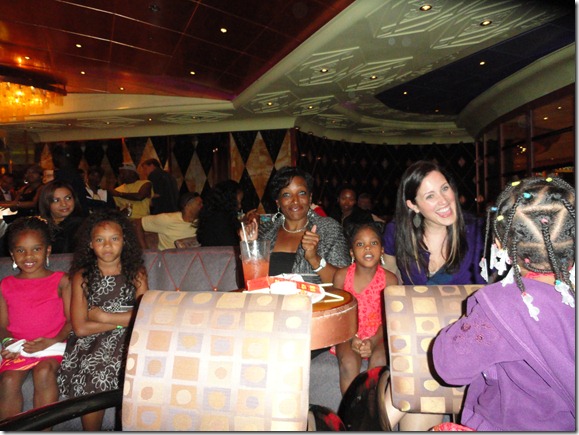 While Tiffani appears baffled by my antics (I think she may also be dancing), Janyse (second from the left) looks pretty pissed off (which I love), I look like a crazy person and my bra may be showing!  I think this picture captures the karaoke experience perfectly.

Then Carsyn’s dad serenaded us with a tune as well.  Anyone care for a little “You’ve Lost that Loving Feeling” by the Righteous Brothers?  Sing it Jason!

After the karaoke hour we had some time to waste before dinner.  Carnival had a bar serving some special drinks on the main floor so we decided to check it out with Tiffani.

They had an ice sculpture drink luge instead of the old, boring shaker thing.  I don’t know what the hell Tiffani ordered but it was blue and had curacao in it.  Oh and she drank it in about 3.2 seconds so I think it was good. 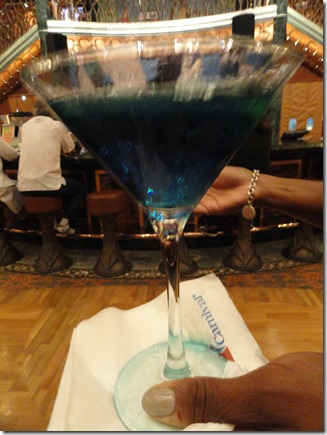 When we turned around from the bar we saw people getting naked!! 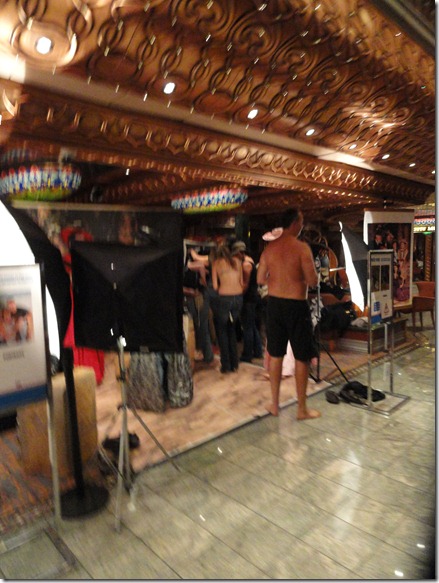 See we weren’t the only ones going crazy to get our picture taken.  These people were changing into western-wear and apparently didn’t care that we could all see them in their underwear.  Cool.

We finally went to dinner and stuffed ourselves with as much food as possible.  Also, for dessert, Carla’s in-laws arranged to have a cake for G’s parents’ anniversary. 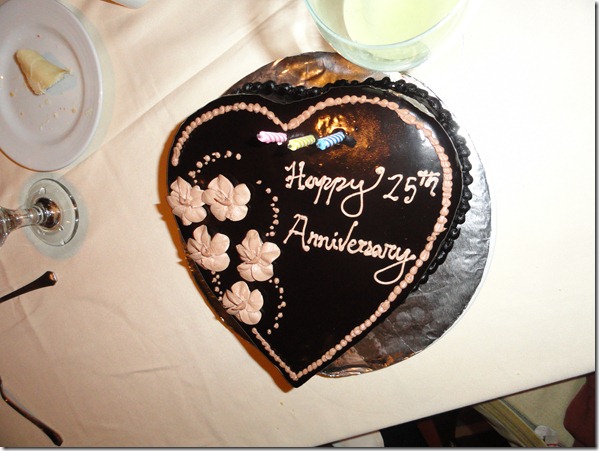 It was actually their 30th, but who’s counting? 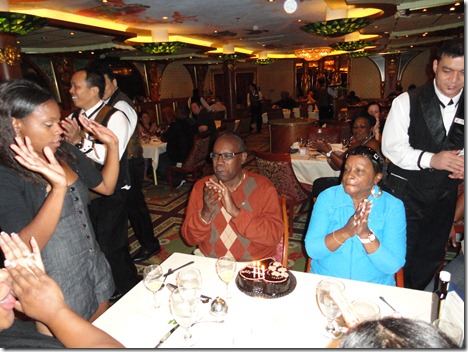 And Carla raised the roof once again.

When we got back to our room after dinner (and before we went to the R-rated comedian), we were greeted by this:

So romantic, right?  Umm, not really.  But we did manage to eat about 100 of those chocolates during the cruise…we would raid the housekeeper cart at every opportunity.  If you’re wondering I gained 10 pounds while we were gone, G gained 20.  We are awesome.

This entry was posted in Eating, Family, Travel and tagged Balls to the Wall, Cake, Music, Romantic. Bookmark the permalink.

6 Responses to The Final Night…