Now that football season is well underway, I thought it was time for me to do a post about it.  For approximately 9 months of the year, George spends his time like this:

Watching sports.  Thankfully he only watches college football, the NFL, college basketball and the NBA.  I would seriously die if he watched baseball too.  And so would Jack. 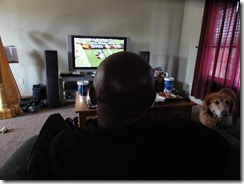 Jack always gets excited when I get the camera out.  Like father, like son I guess.  Also, I don’t know why the TV looks so small (it’s 42’”) or why it looks so far away from the couch.  I swear G moves the couch closer to the TV every day.  And I never realized how much wall space there is above the TV.  The things you realize just by taking a picture…so weird.

Okay, anyway, for today’s sporting festivities I decided to make a little football food for the fatso.  But, since G is trying to look like a supermodel for the cruise at the end of October, I had to try to lighten it up.  I made little, tiny pizzas!

The recipe (if you can call it that) is an english muffin with jarred pasta sauce (or homemade marinara, if you’re fancy like that), mozzarella cheese and turkey pepperoni.

I actually broil the hell out of everything to make sure it all gets hot.  First, I put the english muffin in until that starts to get a little golden, then put the sauce on and shove it under the broiler again, then I add the cheese until that melts and then the pepperoni.  I find that works best, otherwise you end up with fried pepperoni and cold sauce (but don’t worry, G and I still ate them that way).

Next weekend we’ll be camping so there will be no healthy food on the menu!  George is already getting geared up to eat his weight in food and I’m prepared to make and eat enough carbs to put me in a coma for at least a couple of days.

Have a great weekend and eat some good football food!

This entry was posted in Eating, Trophy Husband and tagged Nonsense. Bookmark the permalink.

2 Responses to Time for Balls