A (big) Taste of BBQ

After a hellish day in court (for Tricia, not me), Tricia decided we should go to BBQ.  As a girl who grew up in the PNW, I’ve never really experienced Southern BBQ.  I was excited and then Tricia told me we were going here: 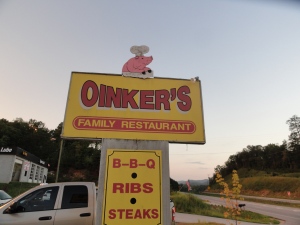 For one-half of the “2 fat pigs”, I was really excited.

Unfortunately, Oinker’s was kind of far from Tricia’s house and we had to drive forever to get there.  Finally, we pulled up to this restaurant that looked kind of like a house and not really like a restaurant.  Look at this decor: 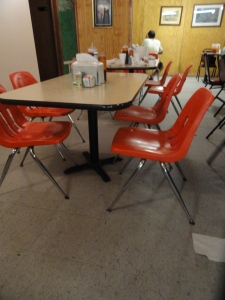 I felt like I was transported by to my high school cafeteria.  Fortunately, I didn’t freak out and these two were there to help me pick things off the menu and not completely embarrass myself.

The proud parents-to-be!!!  Oinker’s is apparently Chad’s favorite BBQ restaurant so he was also excited (I know he doesn’t look that excited, but he was trying to deal with the crazy lady he’d just met…me).

Tricia said the cobbler is amazing so we ordered those right when we sat down. 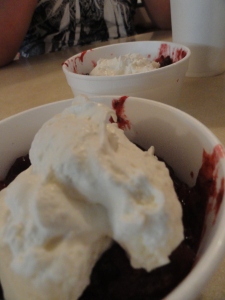 Strawberry cobbler!  I can’t tell you what they taste like because I was too full to eat mine after my dinner and it’s still sitting the the fridge.  I will give a full report later.  Don’t you love the styrofoam, though?

Now, on to the main course.  I’m not a huge meat fan, but I knew I had to try real BBQ so I ordered the BBQ sandwich with two sides. 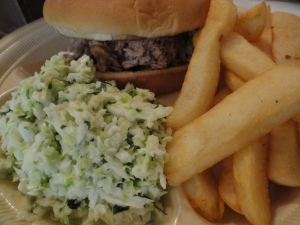 I actually ordered the potato salad because I needed more carbs and less greens so they brought that on the side…and I actually got 3 sides!! 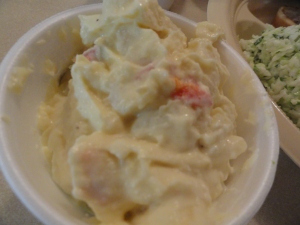 Doesn’t that look healthy?  Okay, I know it doesn’t, but when in Rome… 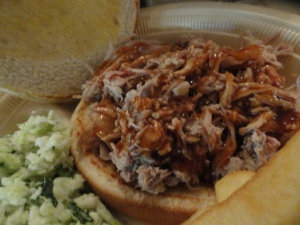 I didn’t realize that the pork would come without sauce and I would get to pick my sauce and drench the meat.  It was seriously so good.

I had such a good time at dinner and am proud to say I’ve experience a real Southern BBQ meal.  Thanks Tricia and Chad!!

This entry was posted in Eating, Friends and tagged Travel. Bookmark the permalink.

3 Responses to A (big) Taste of BBQ