You already saw what I wore to the Oregon Country Fair here, but I had no idea the kinds of “clothing” people would be wearing.  But before I get ahead of myself, we’ll start at the beginning.  G and I recruited the lovely Lea to attend the fair with us.  And she couldn’t avoid having to take her picture with G. 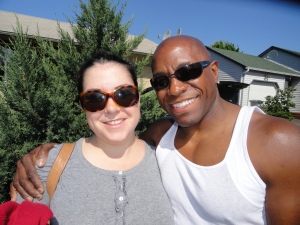 We got on the road at 10:15 am or so and headed to Eugene.  George needed to fuel up for the trip so he had a little snack. 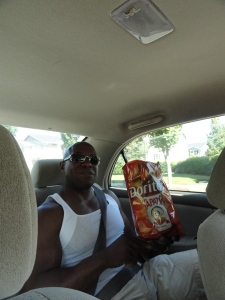 And before you ask, yes, G ate the entire bag and didn’t share one chip.  He is a fat pig.

We drove to downtown Eugene and took a shuttle to Veneta.  G liked the bus ride and was happy that he didn’t have to sit in the back by himself.  Thanks Rosa Parks! 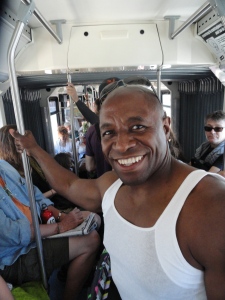 I was pretty happy about the ride too. 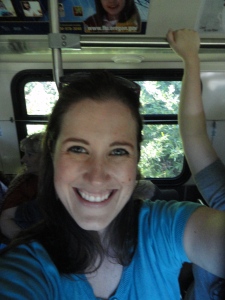 When we finally got off the bus an hour later, we were greeted by this guy: 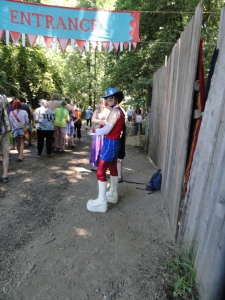 Nice boots, huh?  There were a bunch of people dressed in red, white and blue…they were making sure everyone was registered to vote.  We are so we didn’t have to sign up.  We wandered into the fair and got these cool stamps: 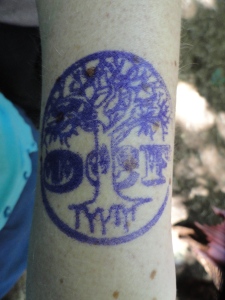 And before we knew it, a parade was coming through. 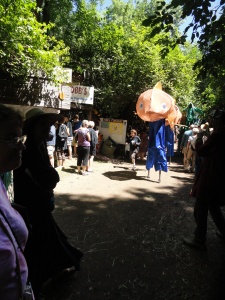 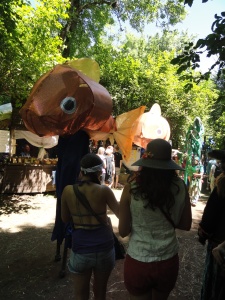 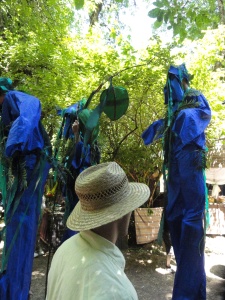 I was really surprised with the amount of people who were walking on stilts…G and I decided that next year, we will walk around like this:

Of course, I will be topless with my boobs painted so I fit in better (no, I’m not joking)…more on that tomorrow.

There were little parades happening all the time.  These people strapped cars to themselves and “drove around”.  They said “beep, beep” and stuff, it was a little weird. 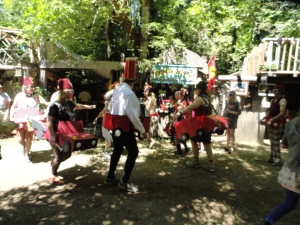 I didn’t get it.  And then these people came through carrying some sort of sacred water “from all over the world”, they did some ceremony/prayer and hugged each other. 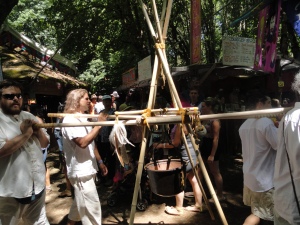 People were very “huggy” at the OCF, which is kind of against CTW’s beliefs…but no one was running around hugging me (shocking, I know) so all was okay.  Then we saw this lady: 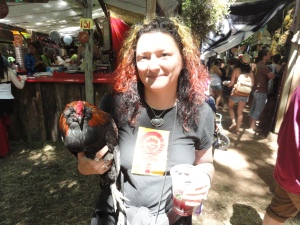 We saw few people carrying around chickens, I do not understand this either.  Also, is her hair supposed to match the chicken’s feathers?  The chickens didn’t seem to mind, though, so I didn’t call PETA.  Another common occurrence was men wearing skirts or kilts. 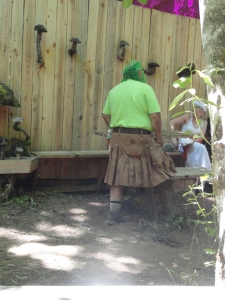 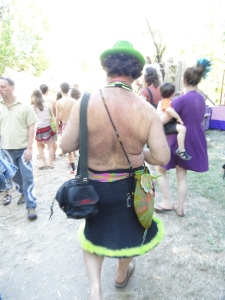 This also weirds me out.  I end up wondering if they are wearing underwears and then I think they aren’t and imagine their balls swinging all over the place.  I start getting grossed out and have to distract myself.  Fortunately, there were a lot of distractions.  I saw this tattoo of Hawaii…it must have hurt like hell to get that tattooed IN HER SCALP!! 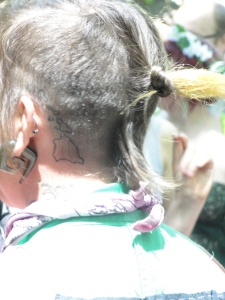 I tried to convince G to get a tattoo like that on the way home, he declined.  He wants me to tattoo my eyeball…I’m considering it, any suggestions?  And we saw a lot of girls who were barely dressed, wearing very weird ensembles.  You can thank G for the paparazzi shots: 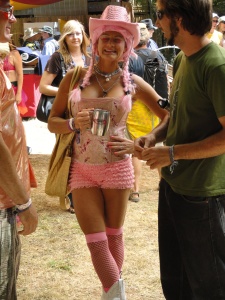 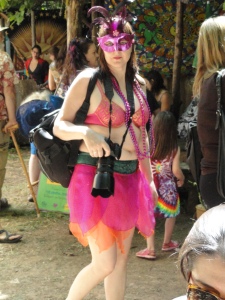 Don’t worry, G took 250+pictures at the fair, so there are many more pictures to come (most have nudity…yay!!).  The last group of people in costumes was also a little creepy, but they were totally in character all the time.  Amazing and weird. 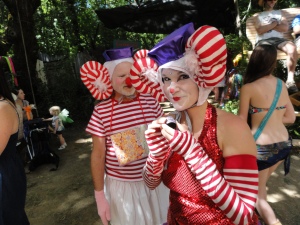 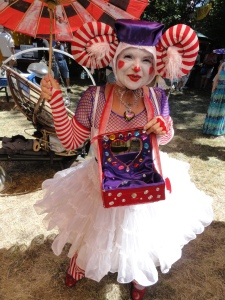 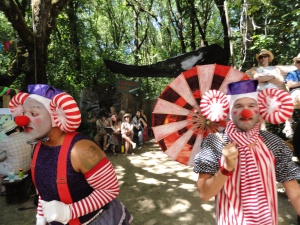 They were very excited to run around and ask “do you want to see the prettiest thing at the fair?”…this question scared me and I thought I was going to get flashed.

So that’s a recap of some of the costumes we saw.  Tomorrow, I will show you some of the more revealing outfits.  You have been warned.

This entry was posted in Friends, Weirdness and tagged Balls. Bookmark the permalink.