Nakedness, Rubbing and Eating (of course)

I know you’ve all been dying to find out what G and I did on our anniversary (and no, I’m not talking about that kind of nakedness or rubbing).  Because we work messed up schedules we celebrated over a few days.  First up…nakedness:

George loves to be naked and thinks he’s Hugh Hefner so he was ready to pose for pictures…me, not so much.

It wasn’t as bad a I thought it would be so I decided to pretend to be getting ready for my Playboy photo shoot. 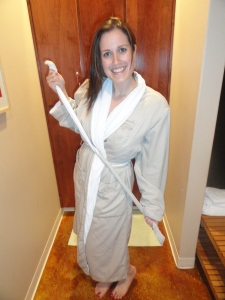 Fortunately, that was as far as the photo shoot got because it was time for our massages.  We made the ladies take our picture before: 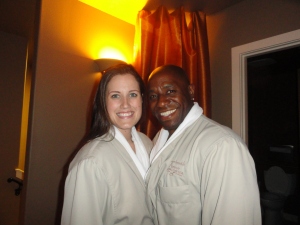 And we were ready.  We had an hour-long couples massage and I’m pretty sure G fell asleep, but he denies it.

This was the only time we touched, I PROMISE.  Because we’ve been married 5 years now, we have to pay other people to touch us.  It’s easier that way. Here we are after the rubbing :

The next night, I met G at my favorite restaurant for dinner.  I got there before him so I pretended to have a date:

My pretend date was great because he let me eat all the fries.  Then G showed up and I had to share.  Boo.

Because we didn’t eat enough food that night (or the next day at Kai’s birthday party) we had Mexican food on Sunday.  Since I had already spent too much time talking to G, I decided to have my own personal photo shoot while he talked about only God-knows-what next to me. 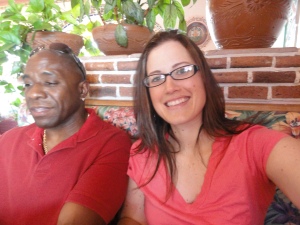 He was still talking while I was doing this and I have no idea what he was saying!  Ha ha. Poor G…his wife is an idiot.  After gorging ourselves on chips and salsa and burritos and nachos we went home for a little dessert.

Yes, that is a re-creation of the top of our wedding cake (minus the frosting on top…we had real flowers top it for our wedding).  We get one every year and eat the entire thing.  I think it’s pretty.

And what do fat pigs use to eat a tier of cake? 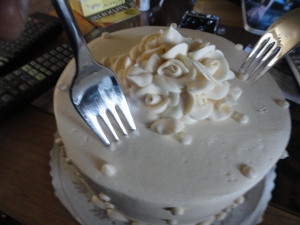 That’s right, forks.  But because we have no self-control and are very greedy, we have to do one thing first.

That is a line drawn across the middle so G doesn’t try to race me to eat more.  He eats faster than me and I need to take breaks.  I usually end up giving him part of mine anyway, but drawing a line allows me to take my time.  Yes, we truly are fat pigs!  And this was the poor cake a short time later. 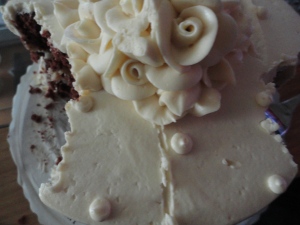 The cake is now gone and we are excited to get another one next year.  Hopefully, we can still fit in our cars to pick it up!

This entry was posted in Eating, Trophy Husband and tagged Balls to the Wall, Cake, Romantic. Bookmark the permalink.

21 Responses to Nakedness, Rubbing and Eating (of course)