It’s time for your prostate exam.

After driving my balls off to and from Seattle, G and I participated in the Prost8k in Eugene, Oregon on Sunday.  Eugene is south of South Jesus where G and I live so I continued to drive my balls off.  It was the second year in a row that we did this race.  The Oregon Urology Institute organizes the event to raise money for a free prostate screening event held in July.  Both years, we did the 5k portion of the race with my coworker and friend, Steve. 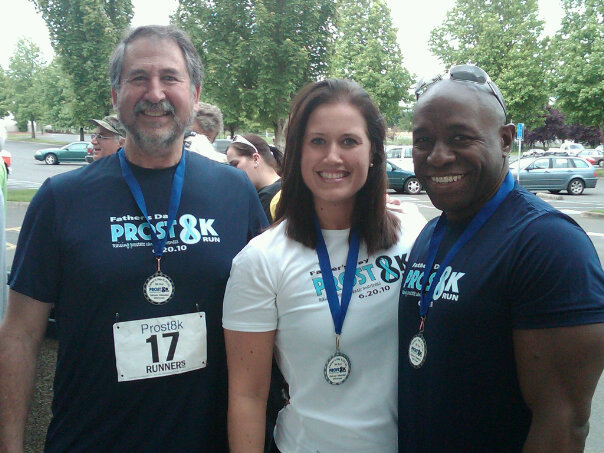 Last Year's Race...we all placed 2nd in our age group.

These two guys are pretty cool because they are both prostate cancer survivors!!  G was diagnosed with prostate cancer in 2008 and had two surgeries after that.  He is now in remission and look at his crazy scar! 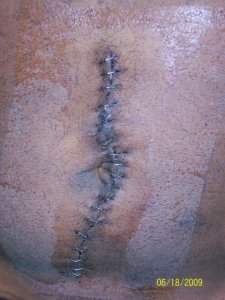 I like to tell people he was shanked by a cellmate when he was serving time in prison for beating his wife.  Most people understand why he would beat his wife…she’s crazy.

Steve had surgery in 2010 and is also in remission.  He wouldn’t show me his scar but loves to tell me about getting prostate exams…umm, gross.  He also likes to joke around and tell people they have to have a prostate exam before the race…even the girls.  Fortunately, you do not.  What’s cool is that all the prostate cancer survivors get to wear special blue shirts and they get a lot of extra cheers from the crowd and other participants.

When we got to Eugene, George tried to see how many times he could take his clothes off in public. 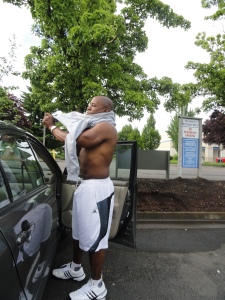 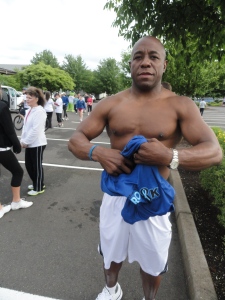 After putting his special shirt on, we had the boys take pictures together. 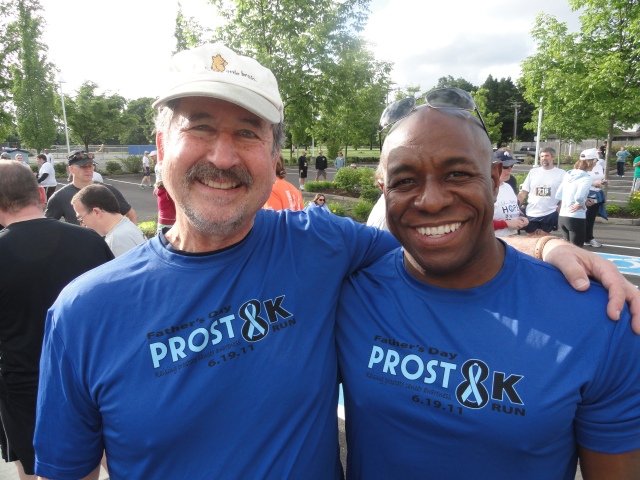 Steve refuses to take pictures with me because he likes George better.  Then George decided that he would try to torture Steve’s granddaughter, Sophie.  Sophie is about 9 months old and G can’t resist holding a baby.  Here’s what happened after attempt #1 to hold Sophie: 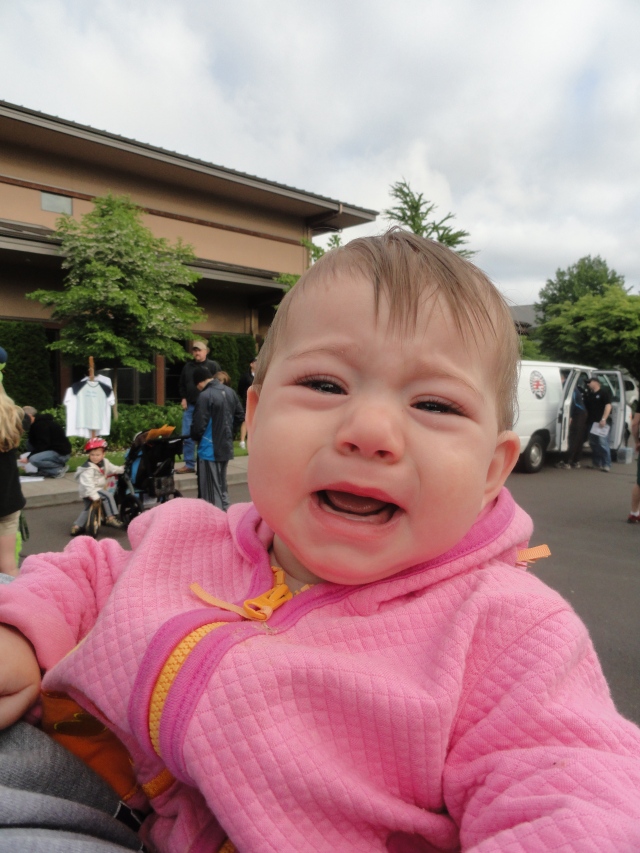 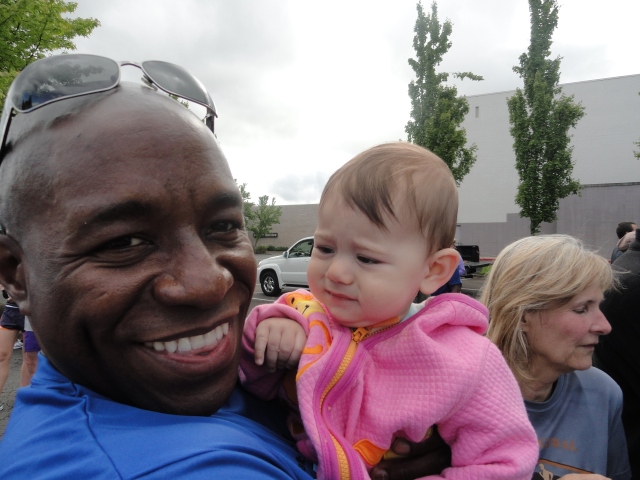 She began crying shortly after this picture.  She did not like G and preferred her grandparents. 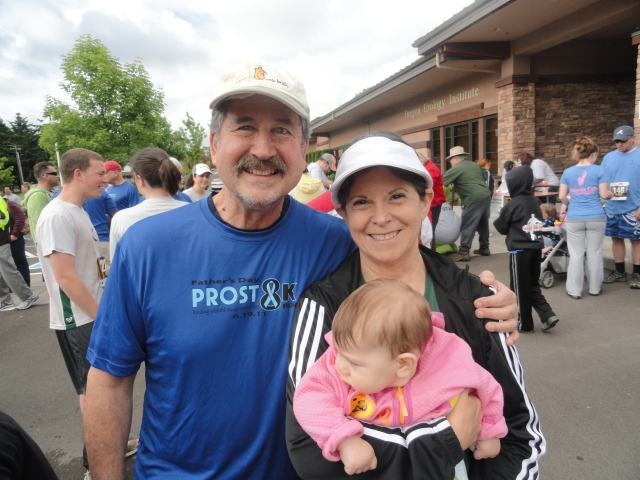 That’s Kathleen, Steve’s wife.  Sophie’s mom was also there, but she somehow avoided getting her picture taken the ENTIRE day.  Good job, Marissa!

After this, Steve decided to make out with a dog and George and I decided to pose with the mascot, Sluggo. 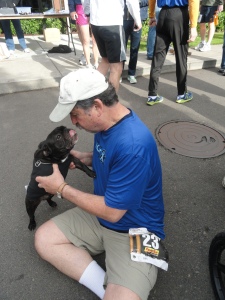 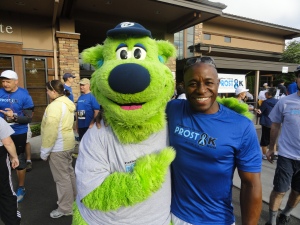 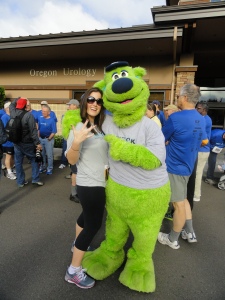 Then it was time for Jazzercise!  I was hoping G would do it so I could take pictures of him crashing into everyone, but he was busy getting interviewed by a Eugene tv station.  Dumb. 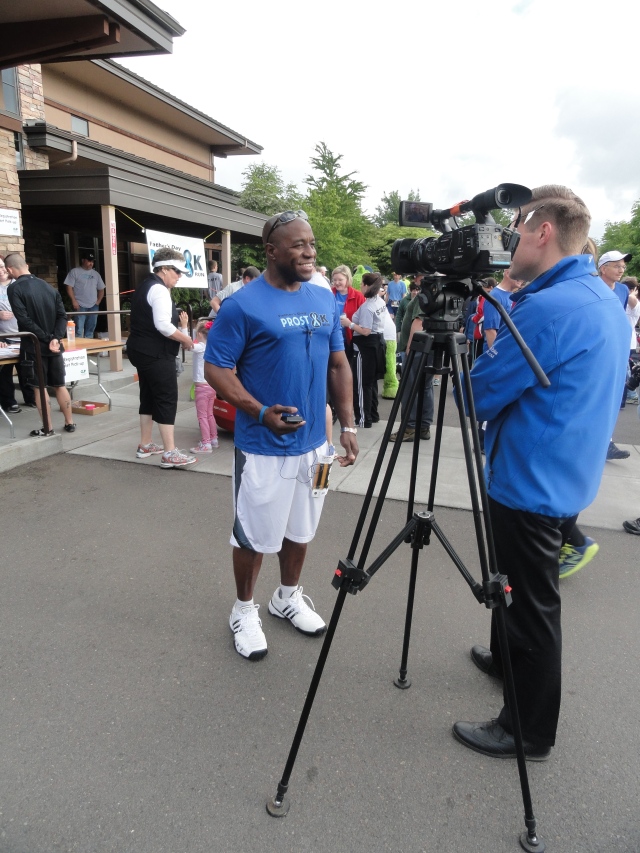 He actually appeared on tv that night and now believes he’s a celebrity.  Thanks a lot Eugene tv station.  So back to Jazzercise… 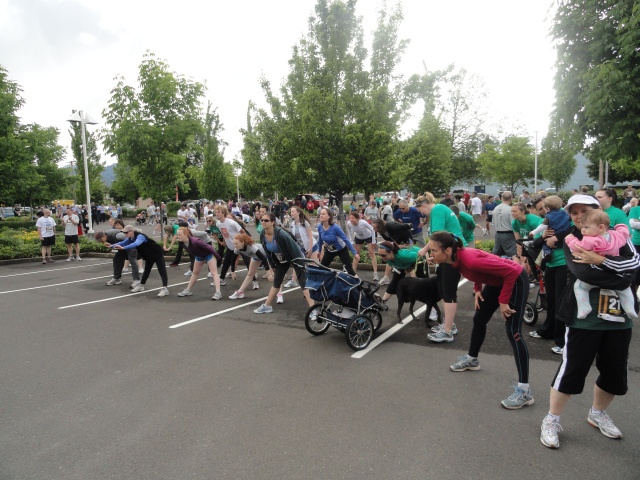 These people were serious about warming up.  I did nothing to warm up.  I was just happy to make it to the f*cking race.

Then it was time for the race to start.  For the last month or so, Steve told me that he wouldn’t be able to walk fast and blah, blah, blah.  We didn’t care, we were just there for fun.  About 2 minutes before the race began, Steve took off to get in the front of the pack because he decided he was going to walk fast.  Well, I wasn’t going to let that old guy beat me so G and I decided to walk with him.  Also, Steve tells me I make him walk faster because he tries to get away from all my talking…so funny!  He always says mean things to me, that’s why he’s my favorite!  He even asked me if I needed 2 parachutes to go skydiving because I weigh so much.  Love it.

And the race began.  I made the boys pose for a few pictures along the race.  This one is one of my favorites: 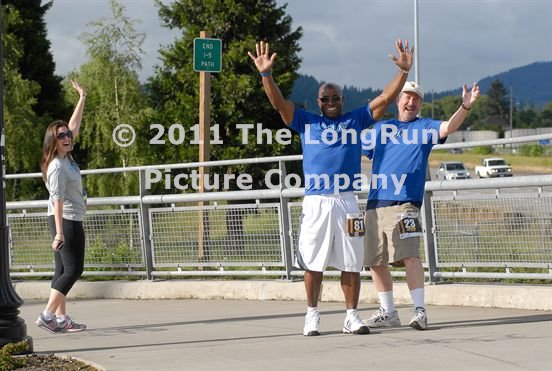 This picture proves that Steve and George are in love and neither of them want anything to do with me!  I hate them.  Maybe they can give each other prostate exams now.

After we finished the race, I paid G to take a picture with me. 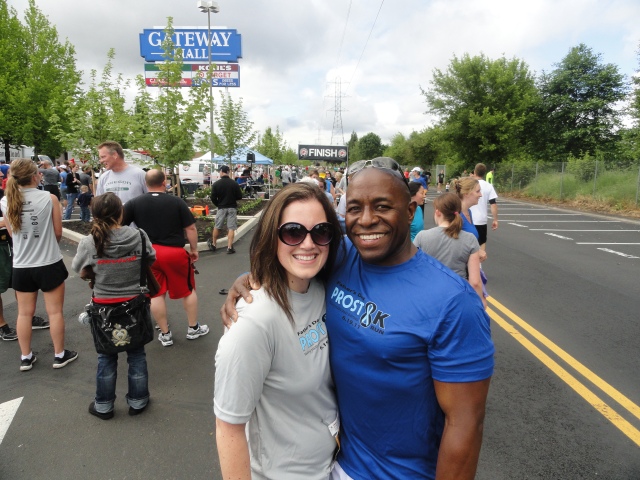 Then we waited for the results.  We knew our time was slower than last year and there were almost twice as many people so we didn’t expect to win any medals.  But when we checked the results we saw that Steve AND George both got 3rd in their age group.  Guess what I got?  I came in the same SECOND as Steve.  I got 10th.  If only I were 50 or 62, I would have placed.  This is how I felt during the medal ceremony.

So we watched Steve and George get their stupid medals and left.  Steve and Kathleen invited us over to their house for a little Father’s Day lunch and, because we can’t pass up a meal, we were totally in.

When we got there, Steve made us these: 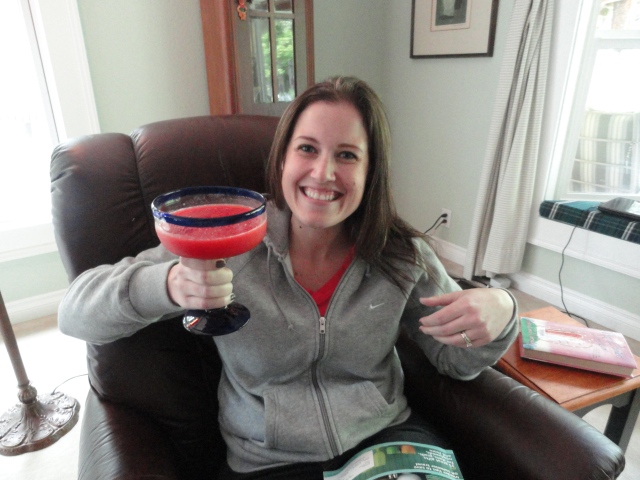 Fresh virgin strawberry margaritas!  They were so good.  He also grilled a TON of chicken and steak.  There were salads, fruit, cheese…it was a nice spread!  Plus, Steve’s other child, Bailee, was there and his oldest granddaughter, Natalie, joined us. 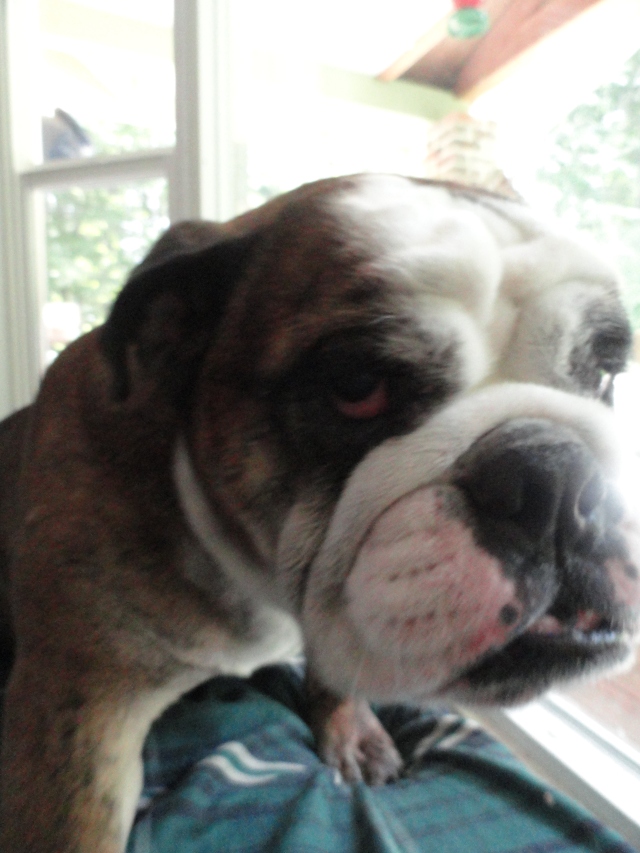 I don’t know how that dog eats…whoa.  About 30 seconds after this picture, Bailee looked like this: 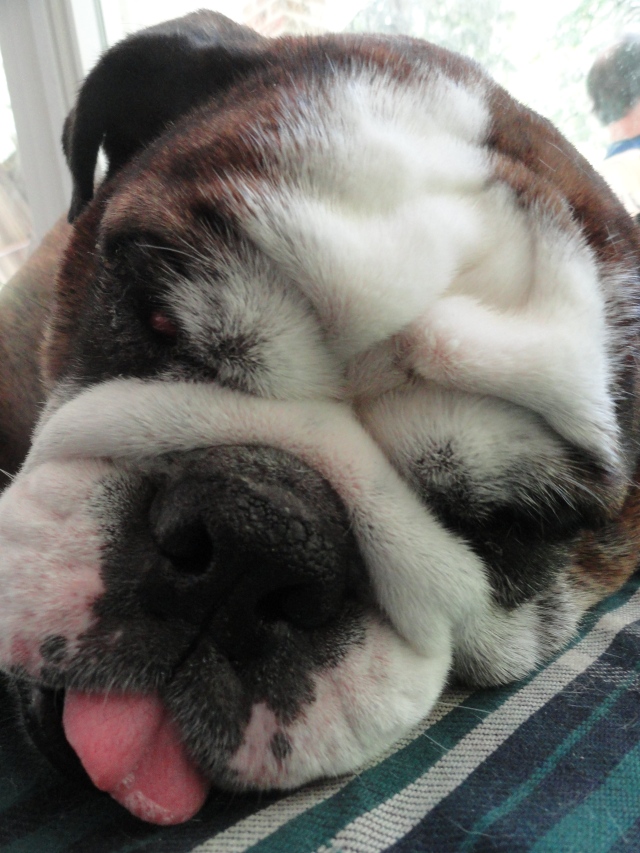 She was exhausted from doing basically nothing all day.  I can completely relate.

Fortunately, Steve’s granddaughter, Natalie, actually likes George and me (probably because Steve made us do this messed up kids dance with her the last time we were there).  At least Natalie agreed to take a picture with George. 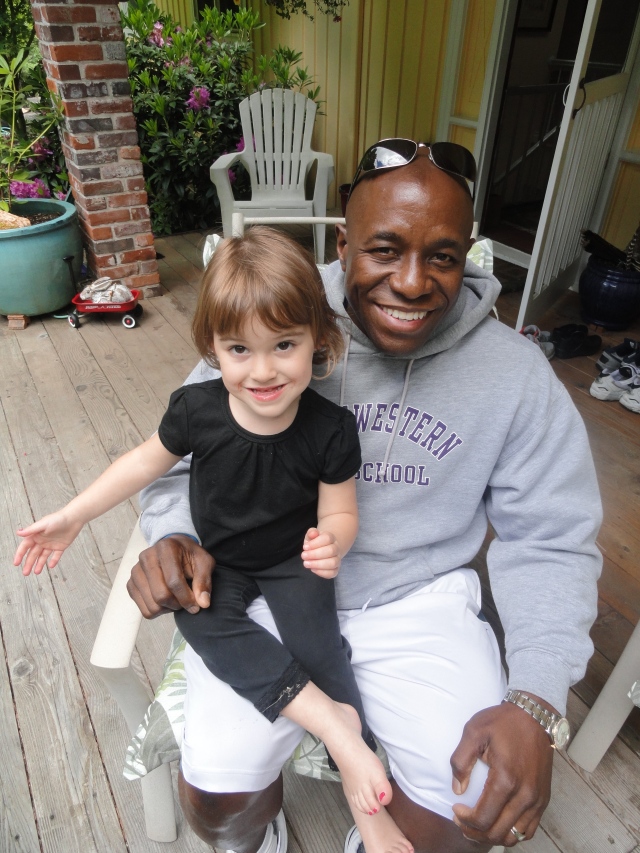 And that was the end of our day in Eugene!  We walked, ate, watched George and Steve bond (a little too much), traumatized a baby and G took off his shirt twice in public!  A successful Sunday.