Ok, we didn’t really dance our balls off, but that sounds better than Listen Your Balls Off, right?

On Saturday night, George and I ventured to the big city of Portland!  When we got into town and parked the car we saw this:

We took pictures and saw her almost get run over by all the cars waiting at the stop light behind her.  Little does she know, getting run over by a lot of cars would be a better experience than getting married…I kid (not really).

We went to this place to see G’s god-daughter perform with the band, Therapies Son.

G’s god-daughter, Lia, is a drummer and I have to admit that I was a little hesitant going to see the band perform.  First, I’m not much of a band/concert person. Second, when it comes to music, I like my music represented by signs like this: 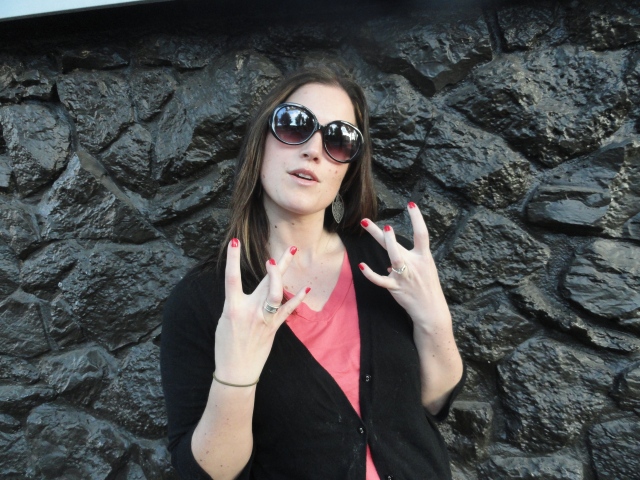 God, that expensive private college education and music minor really did me a lot of good.

So I was pretty sure that Lia’s kind of music is more the head-banging type.  Needless to say, I was a little scared.  We got there really early (and probably could have helped the band set up) and we were able to see Lia before her gig!!  We haven’t seen her in about 5 years so it was really great to catch up.

And take pictures, of course.

And here’s G with the band:

Lia is used to G’s addiction to taking pictures, but the other band members weren’t.  I felt bad for those guys.

Lia normally plays with a band called Peter Pants, but she was asked to fill in on Therapies Son’s tour up the West Coast.  Anyway, after we caught up with Lia, we went to the concert room to get ready for the performance.  It was downstairs at the Doug Fir Lounge and the bar/stage was pretty cool.  Here’s the bar:

I was getting comfortable...we got there a little early.

Umm, and it’s difficult to take pictures at night…can you tell?

The concert finally started and Lia totally rocked that sh!t out!!  I mean, I was really impressed.  It made me want to be a drummer.  Look at these action shots:

I love the blurry drum stick!

Totally Bad-to-the-Ass!  We had an excellent time and I was truly impressed.  I was also proud of myself for not running on stage to join the show.  It’s difficult for CTW to resist a stage appearance.  In the end, Lia and I decided to trade skills.  She will teach me how to play the drums, and I will teach her how to play the harp.  Sah-weet!!

This entry was posted in Friends and tagged Family, Music, Travel. Bookmark the permalink.

3 Responses to Saturday Trilogy, Part III: Dance Your Balls Off!!