After the 5k, we headed to my favorite restaurant.  Lea had a coupon for a free burger and who doesn’t love bottomless fries?  This is who Lea and I had to stare at during lunch: 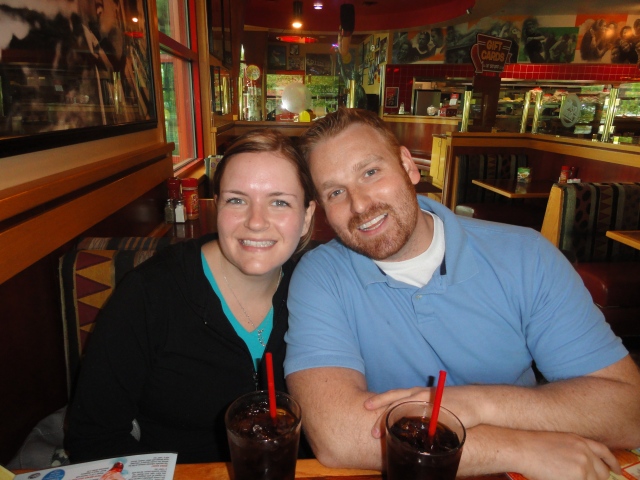 The newlyweds, Kristy and Andy.

Barf.  But they had to look at this, so I don’t know who had the more horrible view. 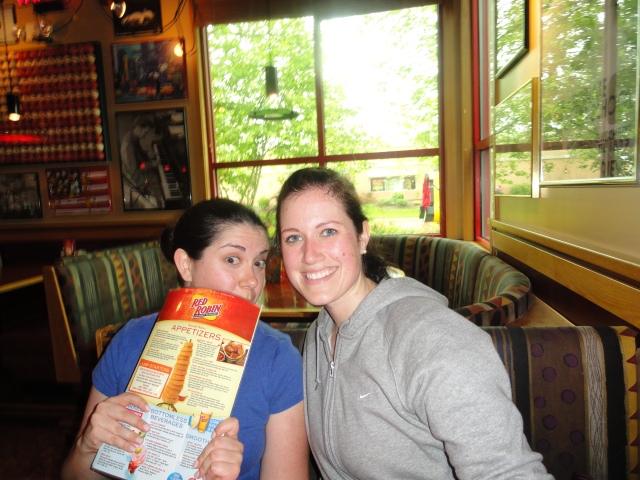 At lunch, Kristy and I gave Lea her birthday present.  It had to be shipped so we didn’t get it until after her birthday, but she loved it! 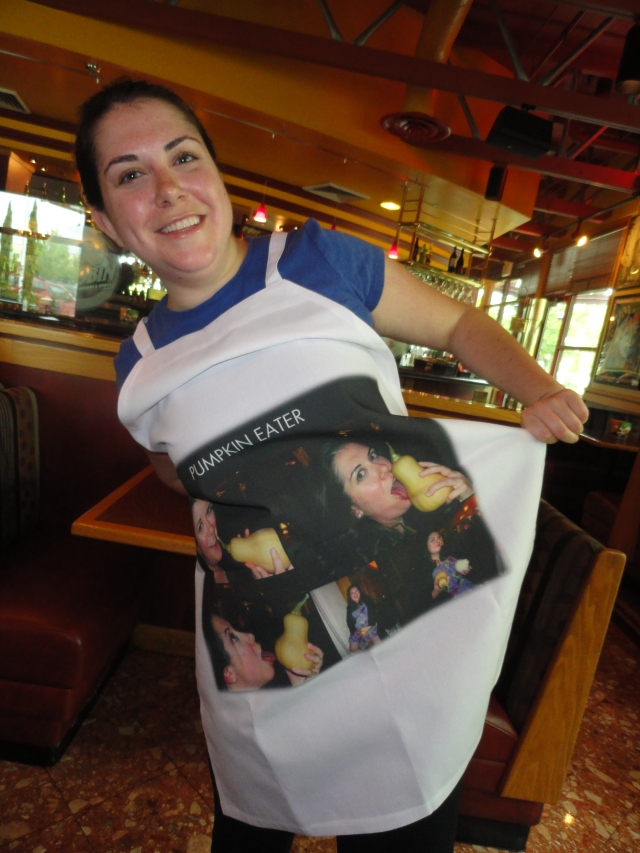 I mean, who wouldn’t like an apron with pictures of herself doing inappropriate things with pumpkins all over it?  The best part is that we took these pictures of Lea at Kristy’s wedding!  Just because you dress us up, doesn’t mean you can (or should) take us out in public. 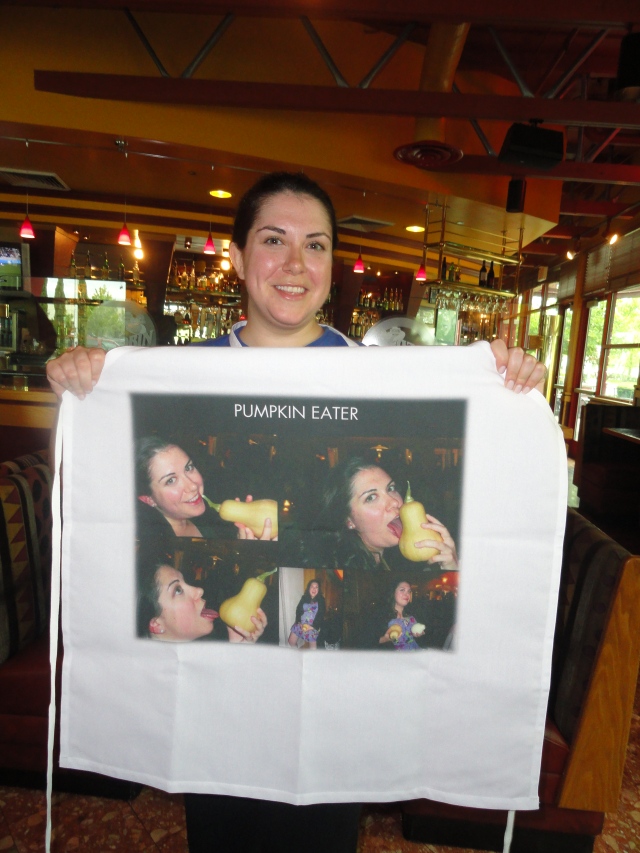 Lea wanted to make sure everyone would be able to see the masterpiece starring herself.  And then the food came…here’s my Chicken Caprese Sandwich with the chicken on the side: 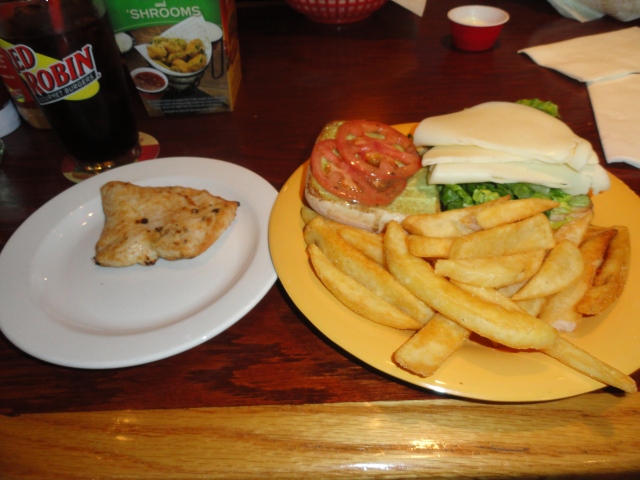 I love how the chicken looks so sad and lonely.  I ate everything on the right and a few baskets of fries.  Because George is on a diet, this is what I brought home to him: 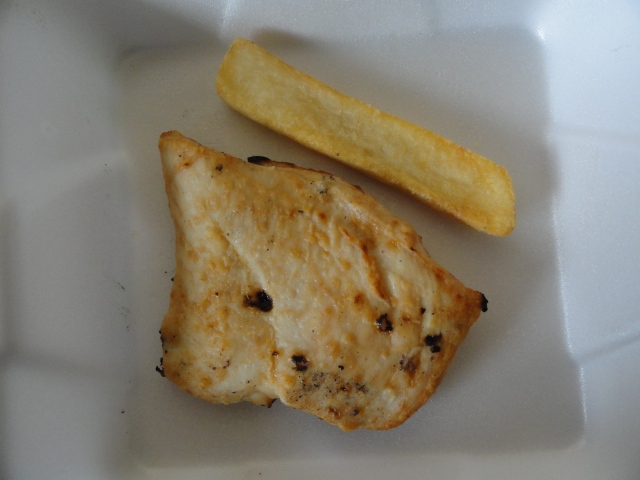 It looks very sad.  I love it.  Oh and I redid my nails…the color is now “Wife Goes On” by Essie.  Love this color! 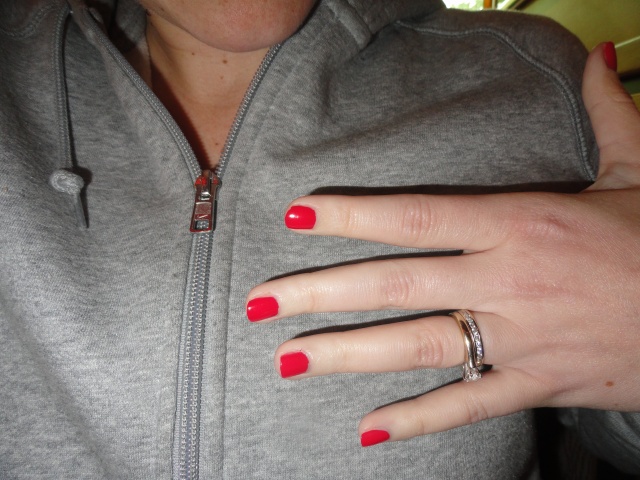 After lunch with The Triplets (and Andy), G and I went to a graduation party for this young lady:

Haley works with George and we went to a bunch of her basketball games this season, she’s a great 3-point shooter.  Congrats Haley!!

The graduation party was at a park in town: 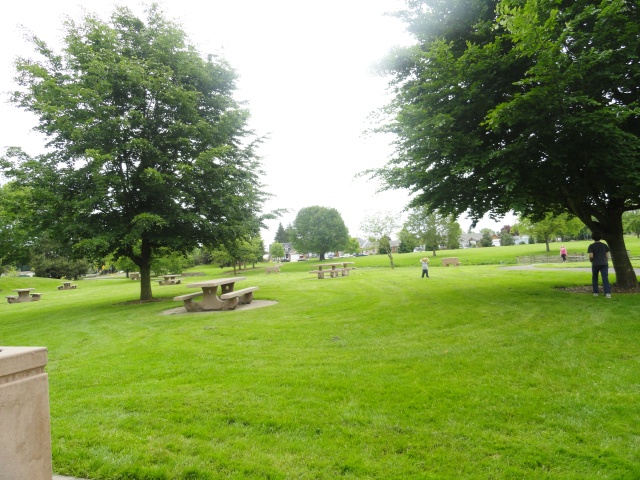 It was a pretty nice day and there was a TON of food.  Because I’d already eaten about 10,000 steak fries and drank at least 5 Diet Cokes, I was too full to eat at this event.  George decided to eat as if he was Kate Gosselin when she was pregnant with sextuplets.  Here’s plate #1: 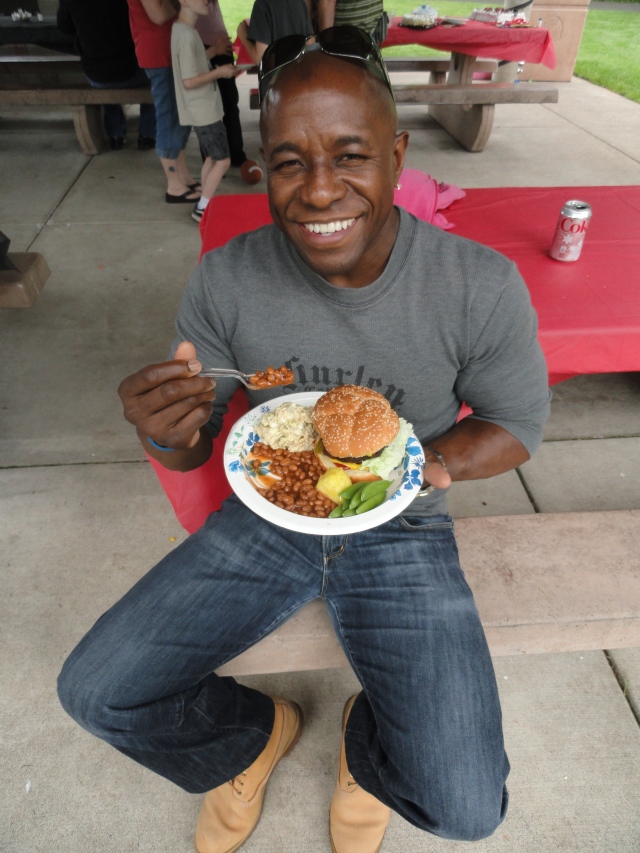 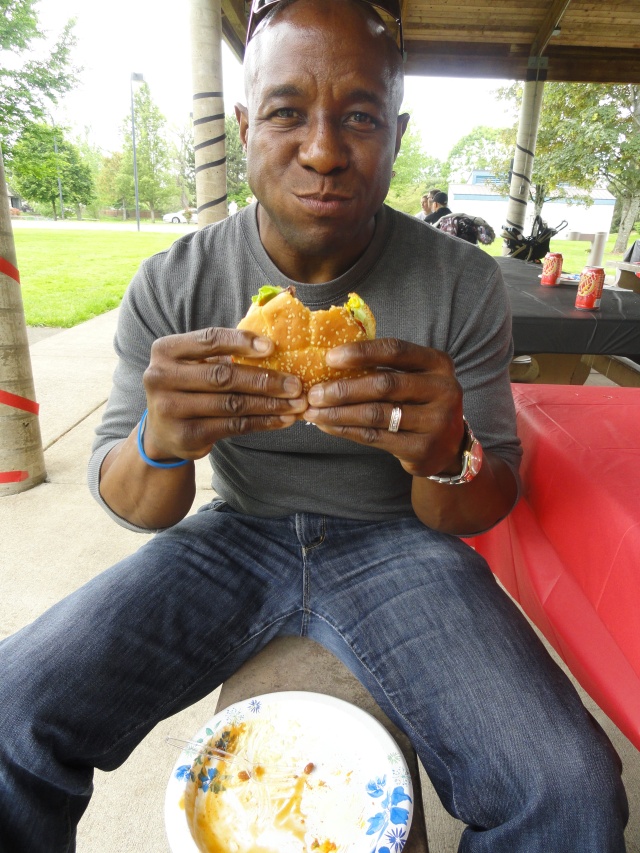 While he was eating, I needed to occupy myself so I had an impromptu photo shoot with one of the coolest people I know…MYSELF!!! 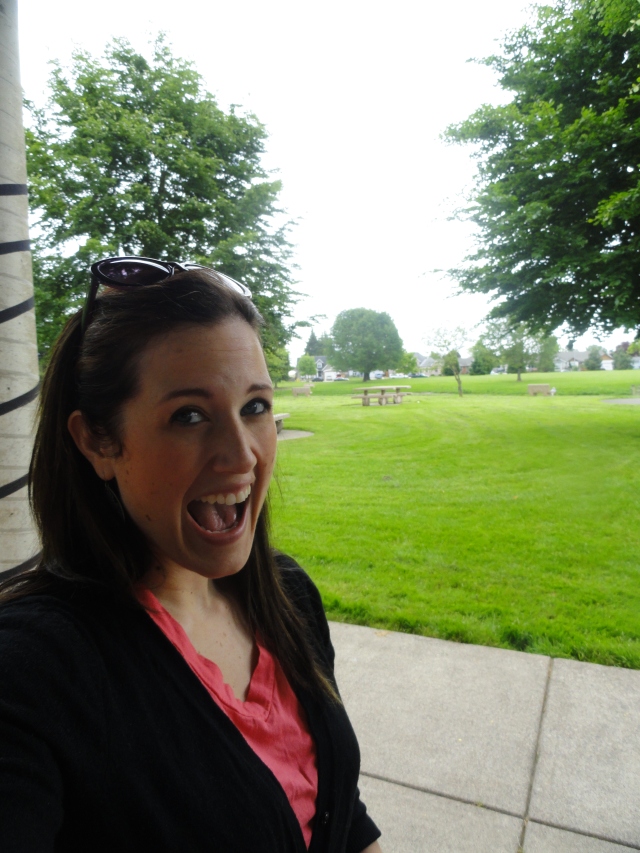 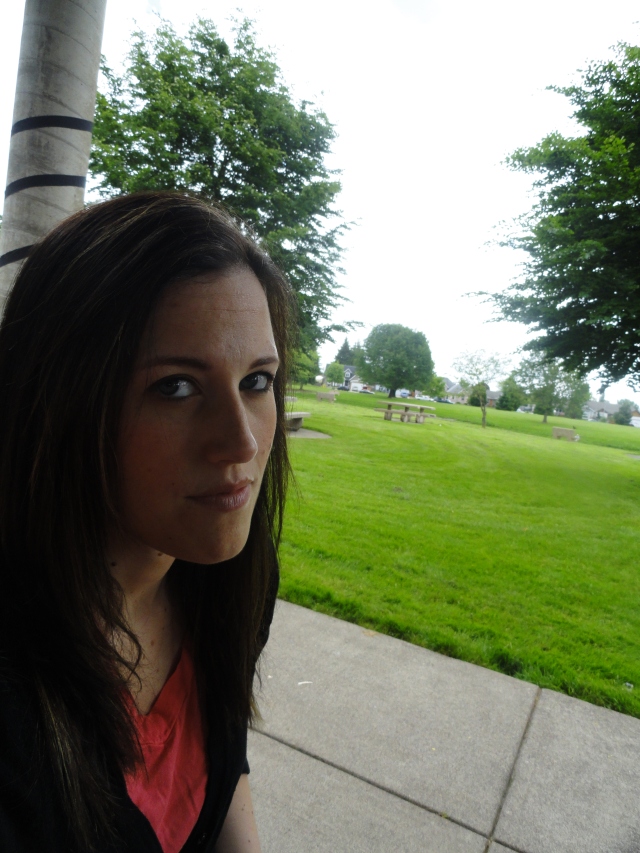 This was to remind me to make a Botox appointment on Monday. What are those lines across my forehead?!!

Then it was time for cake!  What, you thought we were done eating?  There was regular cake with frosting and there was cheesecake.  G got a piece of both to start.  Then because he LOVED the cheesecake so much he had another piece.  Fortunately I was there, because I think G would have had sex with the cheesecake if I didn’t remind him we were in public with minors present. 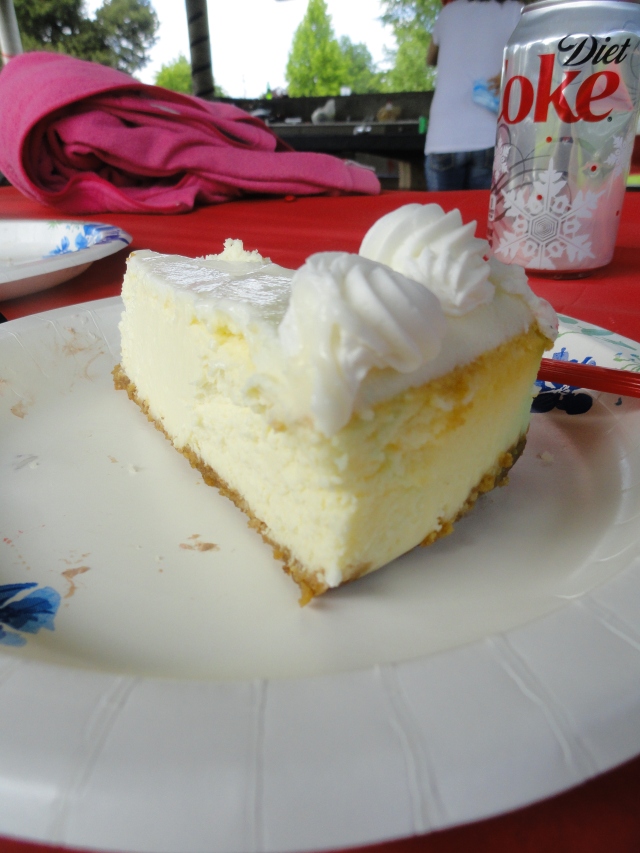 After G scared all the guests with his eating, we decided to walk around the park a little.  And by a little, I mean about 50 feet so we could see these little creatures: 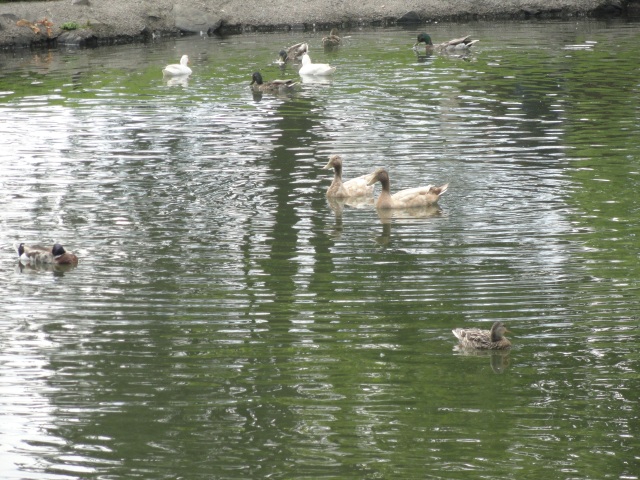 This made me a little sad because I remembered seeing a lot of dead ducks at Steph’s house last week.  These ducks looked a lot happier and were actually moving around so that was nice.

We decided to practice my posing, so here’s my impression of Victoria “Posh Spice” Beckham (if she were 150 pounds heavier): 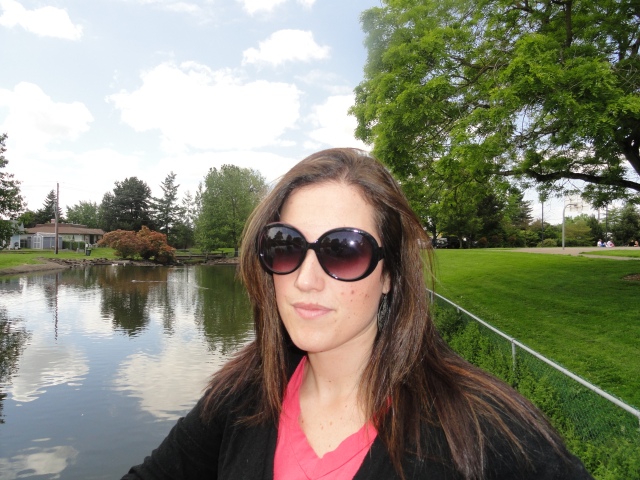 And here’s me getting tired of taking photos: 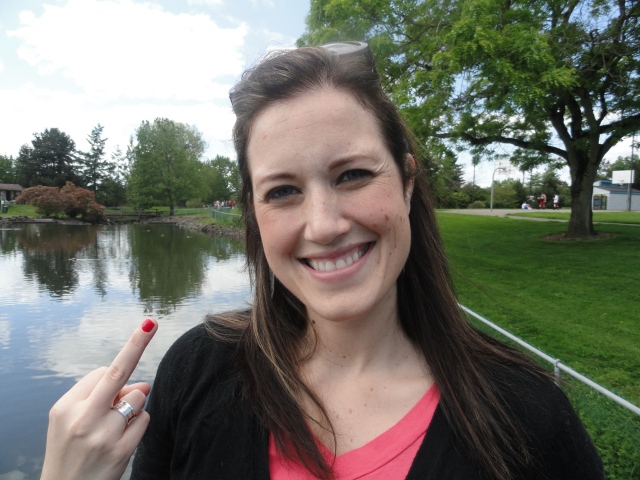 And I think I began offending people with that picture so G and I decided to leave.  Congratulations Haley and we wish you all the best!!

Next Up: Part III, Dance Your Balls Off!!

This entry was posted in Eating, Friends and tagged Balls to the Wall, Friends, Obsessions. Bookmark the permalink.

3 Responses to Saturday Trilogy, Part II: Eat Your Balls Off!!