Being that George and I both look like supermodels, I wanted to let you all in on our secrets for looking so attractive.  I mean, not that many people are willing to drive around in a car with this license plate:

Yes, this was the license plate George had on his car when we started dating.  When I told my friend about this she said “and you still went out with him?”…hilarious!  Poor judgment on my part, I know.  I should have known what I was getting myself into, but I’m a little slow.

G has a pretty consistent workout routine right now, but honestly, he looks the same no matter what he does.  He goes to the gym for an hour and a half a day and then he does a little of this:

And a little of this:

This is real...you are not imagining it.

Yes, I am embarrassed by this.  It totally creeps me out to watch him do The Shake Weight DVD.  Umm, gross. 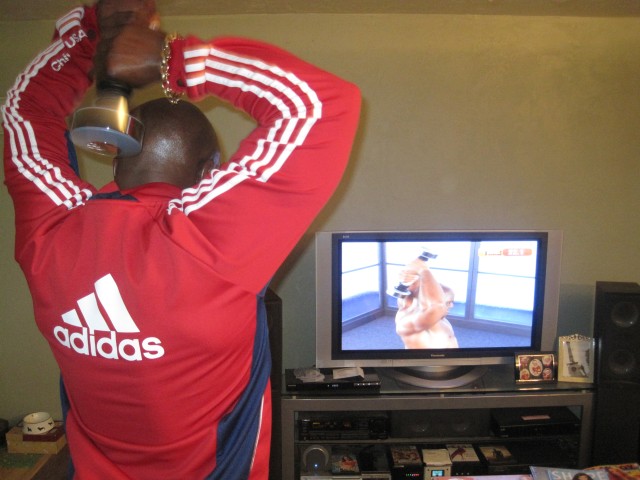 The guy in the DVD is kind of an ugly version of Billy Blanks.

I usually just stare at him when he does this weird sh!t and, thankfully, most of the time he does it when I’m at work.

Now, surprisingly, we bought the Perfect Pushups for me!  I was training for the FBI fitness test and needed to be able to do more pushups.  Fortunately, I didn’t have to embarrass myself at the fitness test because I managed to do that during the interview!!  And I wasn’t asked back.  And yes, it terrifies me knowing that there is a voice recording of me in an FBI vault somewhere.  As soon as I f*cked up that interview, I stopped doing pushups (I showed them…and gained 30 pounds).  Ever since, G has used the Perfect Pushups just about every other day (isn’t he dedicated?).

I almost had to put the smack-down on the self-timer to get this picture.

But I don’t think painting my nails or putting on lip gloss burns that many calories.  How about taking 8 million pictures for your blog?  Does that burn any calories?  Try taking a “good” self-portrait.

I almost went blind trying to get this picture....the flash was too much.

This entry was posted in Trophy Husband, Workout and tagged Sexiness, Workout. Bookmark the permalink.

4 Responses to Shake It